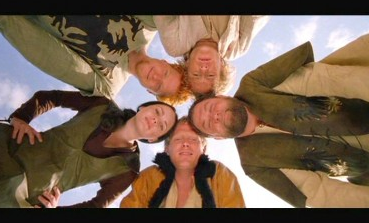 A group of characters want to discuss something privately amongst themselves, so they form a huddle; the camera POV switches, looking directly upward at the characters' heads and torsos as they talk. This is incredibly common in sports movies, where it appears during "the strategic discussion during halftime". (And in (American) Football movies, it appears even more frequently).

This is also seen when a character is in bed, thrown onto his back, or in some other kind of upward-looking position; in this case, it's a POV Cam. It occurs frequently after a character has blacked out, leading to a suitable freak-out when he wakes up and sees loads of people staring down at him.

Examples of Huddle Shot include: