Everything About Fiction You Never Wanted to Know.
Jump to navigation Jump to search
/wiki/Hugh Lauriecreator 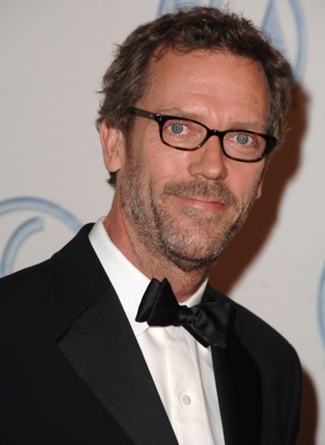 "I would cling to unhappiness because it was a known, familiar state. When I was happier, it was because I knew I was on my way back to misery. I've never been convinced that happiness is the object of the game. I'm wary of happiness."
—Hugh Laurie

"I've always thought of Hugh as a panda, probably because he's not naturally aggressive. Either a panda or an Opel Kadett."
—Stephen Fry

James Hugh Calum Laurie (1959- ), OBE is an English actor, comedian, writer and musician. He first reached fame as a cast member of Blackadder and then as one half of Fry and Laurie in A Bit of Fry and Laurie. He also played Bertie Wooster in Jeeves and Wooster. Since 2004, he has starred as Dr. Gregory House in the show of the same name. He's also an accomplished author, his book The Gun Seller being praised by critics.

This leads to a strange dichotomy in his perception. To British audiences he is the comedic master of The Pratfall, the over done and over silly counterbalance to the more reserved Stephen Fry or Rowan Atkinson... but, to Americans, he is best known as the stern and cynical Dr. House. In fact--perhaps due to his uncannily flawless American accent--some Americans are surprised to learn that he's British. Including the casting director that hired him for the role.

To some, he is a mixture of both, a man of legend perceived to be able to switch from cold and merciless to the most lovable man on earth in a single sentence.

But wherever in the Anglosphere or indeed the world we are, he's still Hugh Laurie.

And according to anybody who has ever played a computer game, he looks oddly similiar in this picture (seen here on the right) to a certain Gordon Freeman.