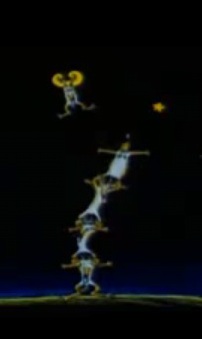 To the moon, Alice!

Sometimes, you need elevation. You might need to reach something on the top shelf, or you might be trying to look over a wall, or maybe you're trying to escape out a very high window. But what do you do when there aren't any trees, hills, ladders, or stools around?

Simple: You stand on your friends.

A Human Ladder occurs any time someone climbs on someone else for added height. Generally, one stands on the other's shoulders, but other methods show up. Some Human Ladders consist of more than two people, although the more you add, the sillier it gets.

Examples of Human Ladder include:

Buffed up a bit from the first sequel onwards with two improvements. First, you no longer take damage when carrying allies, and second, the tower itself can attack enemies within a short range (one hit for each person in the tower,) making the human ladder viable for more uses than simply quick transport across the map.