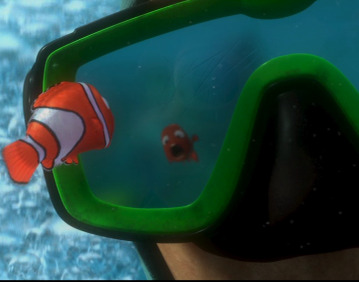 Do you ever feel, in your caves of steel,
The chill of an ancient fear?
Do you shudder and say, when you pass this way,
"A human once walked here?"

Humanity isn't always on the low end of the cosmic totem pole. If a story takes the point of view of animals or relatively weak or primitive non-humans, there'll be a Perspective Flip related to Clarke's Third Law where modern humans—excuse us; MAN -- shall be seen as unnaturally and nauseatingly inconceivable.

The non-human creatures will usually consider Man as Exclusively Evil, and treat it either with wary respect or an odd reverence as a divinity. Whether it's borne from survival instinct or cultural baggage, most will be reluctant at best to actively resisting Man's activities, let alone be curious to know them, lest one would suffer in the most merciless manner a the hands of Man's Industrialized Evil. Possibly the Genre Savvy non-human society realizes that committing to major action against Man would risk breaking the Masquerade, crossing some sort of Moral Event Horizon, or is just plain suicidal.

To meet this trope, the non-humans must consider either individual (completely normal) Man or the Man's civilization as a whole to be:

One exception to this treatment happens when some non-humans, usually children, become pals with a human, again usually another child. The contact is treated as an exception rather than a rule, in that this one human is different and kind, while still considering revealing themselves to Man as a whole as endangering themselves. The non-humans who engage in this contact may or may not have their society's sanction to do so—it may be verboten and seen as risky, or alternately a useful tradition where they selectively reveal themselves to worthy humans. There are advantages to getting on a god's good side, after all.

The non-human society may be a Cargo Cult, primitive fantasy creatures or Insufficiently Advanced Aliens, a Mouse World, robots, or a Hidden Elf Village separated from human civilization.

See also Humans Through Alien Eyes and Humans Are the Real Monsters. In a way we are The Fair Folk and/or the Uncanny Valley to others in this trope.

Often results in Nightmare Fuel or a God Guise. May be a case of Obliviously Evil. Has surprisingly little to do with Humanoid Abomination.

Examples of Humans Are Cthulhu include:

Holly: Men came... filled in the burrows. Couldn't get out. There was a strange sound... hissing! Runs blocked with dead bodies!
[...]
Fiver: They'll never rest until they've spoiled the earth.
Holly: No... they just killed us because we were in their way.

The creature's horrible five-fingered hands and five-toed feet were nailed firmly to a great stone cross!

G'Kar [lifts an ant from a flower and then puts it back]: I have just picked it up on the tip of my glove. If I put it down again and it asks another ant, "What was that?", how would it explain? There are things in the universe billions of years older than either of our races. They're vast, timeless, and if they're aware of us at all, it is as little more than ants, and we have as much chance of communicating with them as an ant has with us. We know, we've tried, and we've learned that we can either stay out from underfoot or be stepped on.

"An empire vast, greater than the infinite, older than the time before time, the immaculate embodiment of might, Gods to the gods, power and radiance and grace and terror and grandeur pure, love and hate and ecstasy and death, walking the worlds as they please, striding time as others would walk across a room, conquering as others would breathe, endlessly, feared and beloved as no others are. The Union is of humanity in only the same sense as humanity is of the bacteria that its cells are evolved from. They are Precursors to all that now is, Elder things, with knowledge and wisdom reclaimed each time from an infinitude of past cycles. They are children to none but Josh, Source-Of-All, younger than none, older than all, firstborn and greatest."

"For more than a hundred centuries the Emperor has sat unmoving on the Golden Throne of Earth. He is the master of mankind by the will of the gods and master of a million worlds by the might of his inexhaustible armies. He is a rotting carcass writhing invisibly with power from the Dark Age of Technology. He is the Carrion Lord of the Imperium for whom a thousand souls die every day, for whom blood is drunk and flesh eaten. Human blood and human flesh - the stuff of which the Imperium is made. (...) Forget the power of technology, science and common humanity. Forget the promise of progress and understanding, for there is no peace amongst the stars, only an eternity of carnage and slaughter and the laughter of thirsting gods."

"How do I put this... Humans have become such dreadful beings."

Dora: "I've totally seen you take muffins into the bathroom."
Faye: "I like to grant them one brief, horrifying glimpse of what awaits them in the Muffin Afterlife before devouring them. I am Muffin Cthulhu."

Abigor was sitting on his couch, mouth agape, staring at the screen as the credits rolled by. What sort of gods were the humans, to be able to destroy a city with a single bomb? He closed his mouth, then shook his head. A single bomb, capable of annihilating an entire city. An entire army would be nothing. They had played with him, when they could have destroyed him and everyone with him with ease.