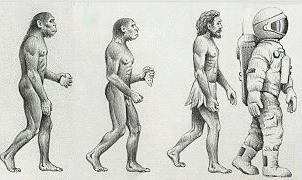 "To be the place where the falling angel meets the rising ape."

Much Speculative Fiction presents a galaxy filled with many aliens that are far more advanced than Puny Earthlings. This is not particularly improbable; after all, assuming they're not the very first race to make the leap, ever, any race that just got space travel recently—which is usually the timeframe Speculative Fiction focuses on, since it's easier for us to relate to—is going to initially be the "new kids" on the galactic scene, encountering tons of other races that have had far longer to get their things together. Even if other aliens aren't super-advanced, if you have lots of different spacefaring races in your setting, you still end up with humanity just being one non-notable race among thousands.

But the problem is, these things are actually being written by humans, for humans, and that usually means people want to see humans in an important, overarching role. To accomplish this, it is made clear that there is something special, something unique about the human character. It could be that humans are inherently noble, kind and idealistic, or that we never ever give up no matter how bad things get, or we are extremely curious and love adventure or simply that our very emotions are our strength. Whatever the case may be, humans are usually given some Western, humanistic value that somehow allows us to transcend our weaknesses and earn the admiration and/or fear of other, more advanced civilizations. Apparently everyone else is stuck in a rut, possibly as a result of being a Planet of Hats.

This will turn out very, very embarrassing to explain if extraterrestrials are actually receiving our media transmissions. Though, to be fair, it's highly likely that any other intelligent species that evolved through natural selection would also instinctively see themselves as being the best, and many of their science fiction works (or equivalent) would have the same trope for their species.

In extreme cases, fantasy writers have depicted humans as (morally) superior to the gods. This is easily accomplished by having the gods acting like two-year-olds, and badly brought up two-year-olds at that (then again, given actual mythology, this might not be too much of a stretch).

If humans know they are special, they will make it clear to the aliens in a Patrick Stewart Speech. Alternately, it might be the aliens themselves who tell humanity that they have the potential to achieve greatness beyond imagination.

May be used as a justification for Earth Is the Center of the Universe. Frequently, it's because aliens suffer Creative Sterility. As humans as a whole are not renowned for modesty this trope of course has much to do with the fact that Most Writers Are Human. It can also lead to Pinocchio Syndrome for non-humans.

This trope lies somewhere in the middle of the continuum are Humans Are Warriors and Humans Are Diplomats. Humans Are Leaders and Humanity Is Insane are specific variants.

Examples of Humans Are Special include:

Please note that a measure of bias is to be expected from the following entries, having been written by humans and using a human perspective.

Retrieved from "https://allthetropes.org/w/index.php?title=Humans_Are_Special&oldid=1955715"
Categories:
Cookies help us deliver our services. By using our services, you agree to our use of cookies.