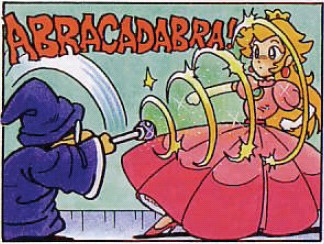 The Damsel in Distress is in the clutches of the villain, but the villain decides that chains, cages, cells, and other ways of containment are too unreliable. The hardest chain for The Hero to break while freeing this prisoner is in the damsel's own mind. Thus the villain Hypnotizes the damsel. As with Save the Princess, this need not be a princess or even a lady.

The motives can be varied, but the two most common are (1) the villain wants the captive for a lover (this is easier than coercion), and (2) to make the captive betray the hero once "rescued". How the damsel is controlled can be done by straight-up hypnosis, possession or a Love Potion (for either motive).

Note that this rarely works well, save for cynical enough stories. The Evil Overlord List would likely recommend this be done just to get her to cooperate in that quiet civil ceremony so you can marry her with as little fuss if possible. Anything else is just asking for trouble.

Of course, Freud Was Right, and such brainwashing is inevitably Fetish Fuel for some and subject to Rule 34.

Compare Hypno Fool, Stockholm Syndrome (doing this over long term), More Than Mind Control, I Have You Now, My Pretty, Hypno Trinket.

Examples of Hypnotize the Princess include:

Retrieved from "https://allthetropes.org/w/index.php?title=Hypnotize_the_Princess&oldid=1890242"
Categories:
Cookies help us deliver our services. By using our services, you agree to our use of cookies.