I'm a Cyborg, But That's OK 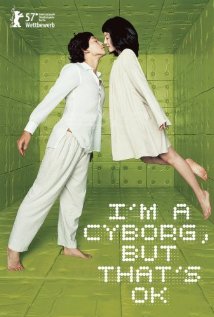 Best described as "a Romantic Comedy that takes place in a mental institution and features a love story between a girl who believes she's a cyborg and a boy who believes he can steal other people's souls."

While critically acclaimed, the film had disappointing sales and box office numbers, possibly due to how completely different it is from the director's other works.

Tropes used in I'm a Cyborg, But That's OK include:

Young-goon: "Anyway, let's just take off our wet socks."
Il-soon: "More than our socks are wet..."