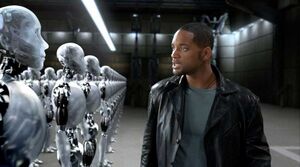 Let me ask you something, Doc. Does thinking you're the only sane man left in the world make you crazy?

I, Robot is a 2004 sci-fi action/mystery movie starring Will Smith. It bears no direct connection to Isaac Asimov's book of the same name.

The story follows Del Spooner (Smith), a homicide detective in 2035 Chicago. By 2035, robots have permeated every level of human society, and U.S. Robotics is on the verge of the largest robotic distribution in history. Spooner is very much anti-robot (and to some degree technology in general), even considering himself the Only Sane Man while everyone is certain that robots are safe and reliable.

His first day back on the job, Spooner receives a call from the scene of what appears to be an open-and-shut suicide case; the victim had been holding a holographic transmitter programmed to call Spooner in the event of his death. The victim is Dr. Alfred Lanning, pioneer of the robotics industry and the man who wrote the Three Laws Of Robotics. Convinced that there is more to the case than meets the eye, Spooner investigates further, and finds a robot in the room Lanning fell from. Only there's something strange about this robot. It threatens his life. It disobeys orders. In short, it has free will, is unrestricted by the Three Laws, and Spooner becomes convinced that this robot "Sonny" is the key to the mystery behind Lanning's death.

As mentioned above, the plot bears almost no connection at all to that of the book, though it deals with themes similar to those presented by the book and much of Asimov's work in general. It should be noted that I, Robot began life as a script called Hardwired—its connections to the work of Isaac Asimov are the results of heavy Executive Meddling to turn it into a Dolled-Up Installment. It was never intended as an adaptation of Asimov's work, and you'll enjoy it much more if you keep that in mind.

Apparently, there is going to be a sequel; it was originally scheduled for release in 2015, but is now in Development Hell.

Has nothing to do with the arcade game I, Robot.

Tropes used in I, Robot (film) include:
Retrieved from "https://allthetropes.org/w/index.php?title=I,_Robot_(film)&oldid=1901913"
Categories:
Cookies help us deliver our services. By using our services, you agree to our use of cookies.