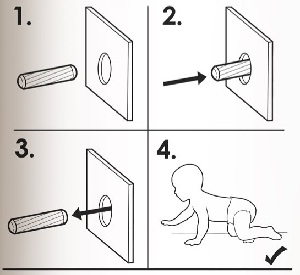 There is nothing duller than dull pornography.
—Agatha Christie, The Clocks

Named after the Swedish home furniture retail chain, IKEA Erotica describes the tendency of badly written sex scenes to be nothing more than "insert tab A into slot B" ad nauseam, as though the readers actually didn't know what goes where. The result is that the participants might as well be doing nothing more interesting than assembling a flat-pack wardrobe, the kind of affordable, Swedish, some-assembly-required furniture IKEA is known for. The point of erotica is to make the reader feel something of what the characters do, which in most cases will be arousal rather than boredom. It's often a sign that the writer didn't want to have a sex scene here but got overruled, or that the writer is sexually inexperienced and writing with the aid of a biology textbook (a lot of Fan Fiction written by 14-year-old girls comes into this category, often minus the biology textbook), making it less of a case of You Fail Sex Ed and more You Haven't Even Taken The Course Yet. Examples are too numerous to list, and too forgettable to remember in any case.

However, it can be used properly. IKEA Erotica has its merits as a tool of parody or simply as a means to fool the censors. If used from the POV of a certain type of character, it can be in interesting insight into their psyche—provided, of course, that the rest of the writing is enough to make this Stylistic Suck apparent. It can also be used if the character simply thinks that the sex sucks (and not in a fun way).

The extreme of IKEA Erotica is "verbing the noun", in which the scene is given mostly or entirely in subject-verb-object sentences in which the key words could be replaced by anything and you'd have difficulty noticing.

HunniBunni: It feels like when you break a tie vote in the Senate?
Born2Bone: Umm, listen, what I meant was...
HunniBunni: This is you, isn't it, Al? ISN'T IT?? YOU BASTARD!!! YOU TOLD ME YOU WERE ATTENDING A STATE FUNERAL THIS AFTERNOON!!!
Born2Bone: Tipper?
HunniBunni: Whoops.

Learner: I read modern writers, and it's "screw this", "he licked her", "she sucked that", "he bit the other", you know, "someone put it there", "he held it", I mean, where's the sensuality?
Marenghi: Where's "he glided in liquid smooth"? Where's "her wispy mound"?

Linkara: "Considering your team's mission statement is only about procreation, you really don't need to know all that much. Insert A into B, repeat as needed."

It's a man's obligation to stick his boneration in a woman's separation. This sort of penetration increases the population of the younger generation.

You see, Jimmy, when a man's penis becomes hard, the man puts it into a lady, into her vagina. Then, the hard penis sneezes milk inside the lady's tunnel and after it's all done sneezing milk the penis stops being hard and the man loses interest in the lady.