I Dream of Jeannie 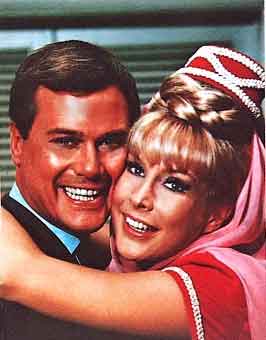 The girl in the bottle plays 'Spin the Astronaut'.

One of the classic 1960s Fantastic Comedies, I Dream of Jeannie ran on NBC from September 1965 to May 1970. Starring Larry Hagman and Barbara Eden, it depicted the life of American astronaut Captain (later Major) Anthony Nelson and the beautiful genie he acquired while stranded on a desert island after a space mission. Because of the series' repeated emphasis on Jeannie's absolute devotion to Tony, I Dream Of Jeannie is also considered the archetypal Reactionary Fantasy, simultaneously establishing a woman with almost limitless power while literally enslaving her to a man who doesn't want her to use it. Despite the enormous potential for his own personal gain with no risk, Tony Nelson would rather embrace conformity so as to remain in the astronaut program. This being a Sitcom, complete success in his goal of appearing normal is of course denied him.

The only question is which gender's fantasy is being indulged. In the first episode, as he was about to be rescued from the desert island where he found her bottle, Tony explicitly freed Jeannie from his service. She followed him back to Florida entirely of her own volition, and when Tony took the most logical approach of saying, "I wish you to vanish!", she laughed that he set her free to do whatever she pleased, and what pleases her is to stick around and take over Tony's life, which may explain Tony's persistent failure to ensure her complete and unconditional obedience afterwards.

Tony's efforts to present a stable home life centered on the opinion of NASA psychiatrist Dr. Alfred Bellows, who had suspected Tony of insanity or worse after the astronaut carelessly described his first encounter with Jeannie during a post-mission examination in the first episode. Complicating this were not only Jeannie and her magical antics, but fellow astronaut Roger Healey, who learned about Jeannie and wanted to exploit her powers for his own benefit (although this was toned down after his first attempt led to near disaster).

Jeannie's sister, mother, and various other friends and relatives from the good old days of Caliph Haroun al Raschid just added to the chaotic mix. Somehow, though, across the course of the five years the show was on the air, their relationship evolved from master-slave to love between partners.

In the last season Jeannie and Tony were married.

I Dream Of Jeannie was created by the infamous Sidney Sheldon (creator of Hart to Hart and author of numerous potboiler novels) in explicit reaction to the success of Bewitched. Inspired by the movie The Brass Bottle (which coincidentally also starred Barbara Eden, though portly Burl Ives was the Genie in that film, while Barbara was his master's human fiancée), he deliberately inverted the genie trope as it then existed, turning the hideous and borderline-malicious male genie of the Arabian Nights into a beautiful female genie who was eager to please her master. He also gave Tony a clear motivation for maintaining a façade of normality (remaining an astronaut during NASA's glory days, with its chances of making history), as opposed to the unremarkable, dull and conventional life idealized by Darrin Stevens.

Sheldon reportedly wanted a brunette Jeannie -- mainly to avoid comparisons to the blonde Samantha of Bewitched -- but could not find anyone who could play the role as he had envisioned it; Barbara Eden was cast almost in an act of desperation.

After its cancellation, I Dream of Jeannie demonstrated remarkable success in syndication, winning timeslots across the country and becoming the first non-network program ever to earn higher Ratings than network fare in the same timeslot. By Fall 1971, Jeannie Reruns in syndication were reaching a larger audience than saw the program first-run on NBC. Its cult-like success spawned the mandatory Animated Adaptation in 1973, and two TV movie semi-reunions -- 1985's I Dream of Jeannie: 15 Years Later (in which Wayne Rogers replaced Larry Hagman as Tony) and 1991's I Still Dream of Jeannie (which eliminated Tony entirely).

A feature film version has been rumored for years, with every star(let)-of-the-hour from Paris Hilton to Halle Berry proposed for the title role. The latest incarnation of this project -- then a vehicle for Lindsay Lohan -- was put back into Development Hell after being briefly scheduled for a 2008 release, a curiously identical fate to the film version of Larry Hagman's other TV show.

Tropes used in I Dream of Jeannie include:
Retrieved from "https://allthetropes.org/w/index.php?title=I_Dream_of_Jeannie&oldid=1847487"
Categories:
Cookies help us deliver our services. By using our services, you agree to our use of cookies.