I Fell for Hours 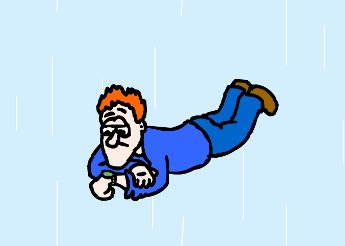 Namely, it's when Not the Fall That Kills You meets Overly Long Gag; a character takes a fall (perhaps from an Absurd Altitude), and falls for a really, really long time, long enough for either the character or the audience to start wondering when the fall will end. Generally unrealistic (unless someone is sky diving), especially since the character will almost always survive the fall. It's rather hard for it not to be Played for Laughs. It might involve a Bottomless Pit, or at least a near-bottomless one. Bonus Points if the character becomes bored and starts to look for things to do to pass the time, though it can be equally hilarious to just have them scream their lungs out the entire time (perhaps even stopping to take a breath mid-scream, which is a sure indicator that this trope is in effect).

Just a little bit of trivia: it would, theoretically, actually take you 42 minutes (so less than an hour) to fall through a frictionless hole drilled through the Earth and accelerating only due to gravity. Considering that the earth is about 6,000 km thick, there's little chance you'll fall for more than a few minutes from any part of the atmosphere with breathable air. Unless you purposefully slow your descent.

Compare Not the Fall That Kills You, the common result of falling for hours, and Gravity Is a Harsh Mistress.

Examples of I Fell for Hours include:

Carmen: How long have we been falling?
Juni: I don't know. My watch doesn't tell time.

One time I was riding the escalator and I tripped. I fell down them for an hour and a half.

Hamton: Think we'll hit bottom soon?
Plucky: I hope so, this is so boring. Getting splattered would be a nice change!

Lobe: Freakazoid! Why is it taking us so long to fall?!
Freakazoid: 'Cause it's funny!
Lobe: No it's not, it's just stupid! It's as dumb as that Handman episode!