I Have Many Names 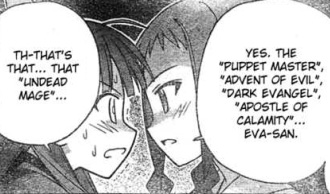 In some stories there are characters with so many names, aliases, bynames, and/or titles that it's hard to keep track of them. An attempt to do so ends up with an Overly Long Name. As such, when asked who they are, it is not uncommon for them to reply "I Have Many Names."

Gods and whatnot tend to have hundreds of names.

Bonus points if the character lists these names in the form of a Badass Boast, in which case some of them are probably Awesome McCoolnames and/or Names to Run Away From Really Fast.

In a comedy, expect one of the names to be noticeably different from the others, and/or somewhat less than impressive.

Polar opposite of No Name Given. Compare The Magnificent. Contrast Just the First Citizen.

Examples of I Have Many Names include:

Every one of her many names mean "star", though, and that's what he ends up calling her.

In 1657, after switching allegiance towards Oda Nobunaga and claiming himself a Minamoto descendence, he again changed his name as Tokugawa Jirōsaburō Ieyasu, as the "moto" in his previous name came from Imamoto Yoshimoto. While the "family name" and the self-referring name remained constant afterwards, in the subsequent years he'd more likely be referrer by his title of the time, which would be too long to list here.
It should be noted that since he claimed to be a Minamoto (and Tokugawa is merely a cadet branch of Minamoto), and Minamoto is of the Kabane of ason, in some situations he'd call himself Tokugawa [Jirōsaburō or whatever he had at the time] Minamoto no Ason Ieyasu.

Retrieved from "https://allthetropes.org/w/index.php?title=I_Have_Many_Names&oldid=1956683"
Categories:
Cookies help us deliver our services. By using our services, you agree to our use of cookies.