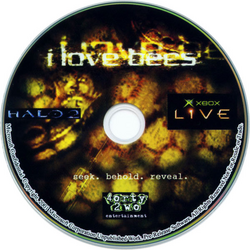 The DVD that 42 Entertainment gave out at select events following the conclusion of the game.

"I've been thinking a lot about bees."
—Durga

I Love Bees is an Alternate Reality Game created by 42 Entertainment to promote Halo 2. The game took place on www.ilovebees.com, and was in-universe an amateur beekeeper's personal website that had been taken over by artificial intelligences from the future. The plot took place in two timelines, one in the present year 2004 and the other simultaneously in 2552.

Players allied with The Operator were required to go to certain payphones at certain times to answer calls from the character. Persons who answered the calls needed to show they were part of the game by answering basic questions (e.g. “What's my name?”), after which parts of an audio drama were made available on the site. Later calls were performed by a voice actor playing The Operator, with whom players engaged in role play.

The audio drama consists of recordings taken by Durga in 2552, explaining what's going on in the future. Durga is adopted by a boy named Jersey, who realizes he has “God's own spyware” and uses her to spy on the hot girl down the hall, Jan. In doing so, it comes to light that her family is a lot more interesting than first apparent. Durga goes on to spy on several other people she finds interesting and eventually assembles them into her “crew”. She takes her crew to a military base to deactivate the alien artifact, which will potentially keep the Halo from activating, and the action causes the AI fragments to return to the future and merge back together into Melissa. Everyone lives happily ever... no, wait, then The Covenant invades Earth as Halo 2 begins.

This is a heavily shortened summary. For the best guide to the game, see here; for just the audio drama, see here.

Tropes used in I Love Bees include:

Durga: "You want nothing more of your opponent than a skull nailed to a fencepost so that everyone knows the price of crossing you."

Thin: I could teach you some things... but, it's your funeral.
Jan: Not yet.
Thin: Sooner than you think.
Jan: Is that a threat?
Thin: No, just experience.

Kamal: Okay, I wormed into their private CP channel and built an audio mask out of the voice archive samples you gave me. Then I wrapped it around a zero-lack sequencer that jacks into the...
Mr. F: Jesus, just show me the thing already.

Kamal: If it is counting down, what do you think it'll do?
Durga: The last time it was triggered, the shockwave flatlined communications throughout the Solar system for more than 7 seconds.
Jersey: Durga doesn't know, but she thinks it'll probably be bad.