I Need a Freaking Drink 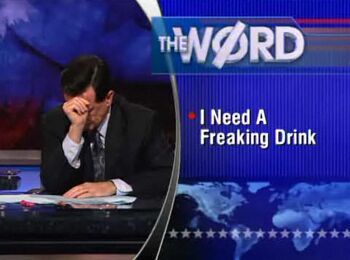 Ever just have one of those days? Where things just go from bad to worse? Everything that could go wrong does go wrong? Does the entire world have it in for you? Or have you just had enough of being Surrounded by Idiots?

That's when you just say to yourself (or whoever happens to overhear)..."I need a freaking drink."

This comes in one of two flavors:

While this is similar to Drowning My Sorrows, this is only a temporary solution. If the situation is especially bad, said drink can incite the same reaction as the Best Beer Ever. Once they have said freaking drink, they're back on their feet with their head securely attached and ready to get back to business. Someone who needs a freaking drink will never have a Beard of Sorrow, either. If they need nicotine to go with their alcohol they may opt for a Cigarette of Anxiety.

Can sometimes be a type of Trigger. Contrast No More for Me. Also see Gigantic Gulp. Occasionally, the drink might be milk.

Examples of I Need a Freaking Drink include:

Retrieved from "https://allthetropes.org/w/index.php?title=I_Need_a_Freaking_Drink&oldid=1929193"
Categories:
Cookies help us deliver our services. By using our services, you agree to our use of cookies.