Everything About Fiction You Never Wanted to Know.
(Redirected from Ice Climbers)
Jump to navigation Jump to search 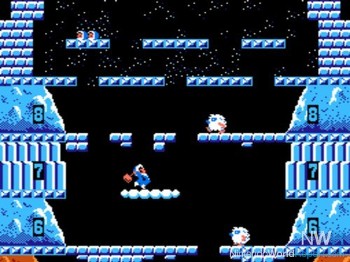 Ice Climber is a vertical scrolling Platform Game originally released by Nintendo in 1984 for the Famicom in Japan, and was later converted into an arcade title in the "Vs." series (as with many early Famicom/NES titles). It was released in North America a year later as a launch title for the NES.

Players control characters dressed in stereotypical-eskimo gear: player one is the blue-clad Popo, while player two is the pink-clad Nana. The general goal of each level is to climb up several layers of ice to reach the top of a mountain. Each player carries a wooden mallet which they use to knock ice into or hit enemies, club openings in the levels, and collect power-ups. Like eggplants... Just roll with it.

The game would likely be largely forgotten without the huge boost of publicity generated when Nana and Popo were The Unexpected inclusions in the Super Smash Brothers series, starting with the second game. Uniquely, while the two characters act as a team, generally the player is only able to control one at a time while the AI copies his movements. One can be defeated, but not the other, but a single Ice Climber is at a severe handicap.

Other media to reference Ice Climber include the Wario Ware series (where it is the basis of several micro-games) and later iterations of the Kirby series (where Kirby's ice power-up gives him a parka exactly the same as Popo's). They also tend to appear in fan-works related to Smash such as There Will Be Brawl.

Oh, and to be clear, while the game's title is the singular "Ice Climber", the characters are referred to as the plural "Ice Climbers", commonly mistaken for the actual title of the game, even by Nintendo press releases.

Tropes used in Ice Climber include:
Retrieved from "https://allthetropes.org/w/index.php?title=Ice_Climber&oldid=1574483"
Categories: