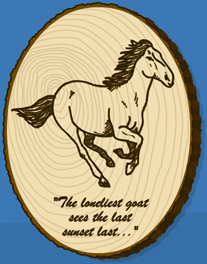 Something that looks like a Koan, walks like a koan, quacks like a koan, but lacks... substance. It sounds meaningful at first, but after you think a moment, instead of getting some rush of insight, you realize that it is nothing more than nonsense, or just a joke dressed up in profundity's hand-me-downs.

If done savvily enough, is indeed a form of Truth in Television -- the point of a Zen koan (literally "Public Case", a story), is to show that contradiction is actually a delusion, and help the student let go of the mental habit of arranging things into dichotomies (because both extremes, despite their apparent contradiction, are actually one thing).

Taken to the extreme (and stretched out), this becomes a full-fledged Word Salad Philosophy. If used as part of The Summation, can venture into Fauxlosophic Narration.

The Trope Namer is the Hacker's Jargon File.

Compare Mistaken for Profound, Seemingly-Profound Fool, When Is Purple?. Compare and contrast Shaggy Frog Story. Related to True Art Is Incomprehensible. Has nothing to do with actual ice cream, a Sailor Moon character or the absolute angel.

Examples of Ice Cream Koan include:

Retrieved from "https://allthetropes.org/w/index.php?title=Ice_Cream_Koan&oldid=1730192"
Categories:
Cookies help us deliver our services. By using our services, you agree to our use of cookies.