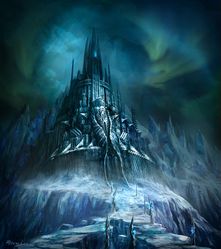 The ice palace tends to be a castle-sized and shaped piece of an Ice World. It may belong to a larger ice world, or it may be relatively self-contained...

It's a huge, foreboding building that seems as if it was once inhabited by normal people. However, it has now frozen over, and any people who currently live there are definitely not normal.

Expect any videogame boss or Big Bad who lives there to be An Ice Person. Snowlems might also be found living here.

Ice palaces tend to turn up in the mid-to-late story or videogame because of their nature. Also expect icicles, the occasional floor that's too slippery to walk on, and—if it's a videogame -- BlockPuzzles and various Malevolent Architecture.

A brick-and-mortar dungeon that's entirely underground counts as an Ice Palace if it is otherwise cold enough. But an ice palace has to be more, um, palatial than an icy cave.

May even be ruled by a Winter Royal Lady, or a literal Ice Queen.

Examples of Ice Palace include:

Retrieved from "https://allthetropes.org/w/index.php?title=Ice_Palace&oldid=1708089"
Categories:
Cookies help us deliver our services. By using our services, you agree to our use of cookies.