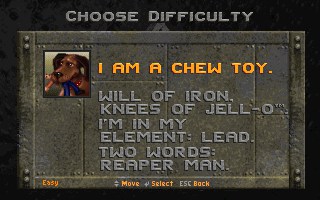 Even difficulty-selection menus are cuter with puppies.

Most video games have adjustable Difficulty Levels so as to provide more of a challenge to good players while allowing poor players the satisfaction of finishing and finding out how the story ends. Traditionally, they would just be called Easy, Medium, and Hard (and possibly Expert). However, a recurring clever idea is to name them in a way reflecting of your game's style or plot. Another widespread trend is to Title Drop one of the difficulty settings, typically the hardest one.

Of course, if you use more than one word, everyone will call them "Easy", "Medium" and "Hard", but it does help establish continuity and mis-en-scene.

For idiosyncratic "Very Easy" and "Very Hard" levels only, see Easier Than Easy and Harder Than Hard.

Only unusual examples should be added to this article.

See also Easy Mode Mockery, where the idiosyncracy extends to your treatment in the gameplay. For comments on your gameplay, see Idiosyncratic Combo Levels.

Examples of Idiosyncratic Difficulty Levels include:

These examples should be the names of the levels only, since that's what the trope is about. The details of gameplay differences between levels are irrelevant unless they are related to the name. Examples are listed in order from easiest to hardest.

The tournament mode has:

Retrieved from "https://allthetropes.org/w/index.php?title=Idiosyncratic_Difficulty_Levels&oldid=1587990"
Categories:
Cookies help us deliver our services. By using our services, you agree to our use of cookies.