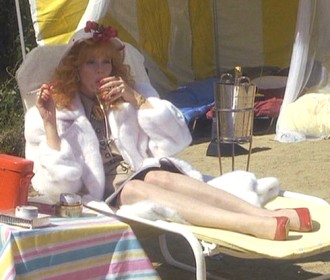 Whether old money, New Money, royalty, or nobility, these people just spend their time living off their vast sums of money they earned, or their family's sums of money.

Not to say they just sit around doing nothing (usually). They have too much of their free time taken up by travelling, going to parties and galas, attending horse races and polo matches, keeping up with the latest Society gossip, choosing which clothes to wear, spoiling Mister Muffykins rotten, and occasionally doing at least some token work in their family business. So they can't really be idle. They're too rich to be.

The threat of Passed Over Inheritance is particularly powerful against the younger members of the family in this set.

Now this is some Truth in Television, as some real life people have acted like this (such as during the "Gilded Age"), as do Socialites today. And the Ermine Cape Effect long gave the impression of this among royalty and nobility.

A Rich Idiot With No Day Job exploits this image to hide their superhero activities.

Contrast Non-Idle Rich, Royals Who Actually Do Something, Rebellious Princess.

Examples of Idle Rich include:
Retrieved from "https://allthetropes.org/w/index.php?title=Idle_Rich&oldid=1254982"
Categories: