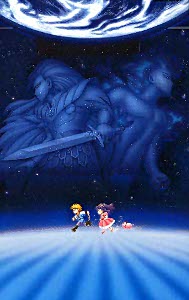 Psychic Kid Hero and friends can breathe in space.

An Action Adventure game with RPG Elements for the Super Nintendo, developed by Quintet. Enix (now Square Enix) published the game in Japan, and Nintendo published it worldwide, with release dates of November, 1993 (Japan); September, 1994 (North America). It was released in Europe in April, 1995 under the title Illusion of Time. The game revolves around the adventures of Will, a boy with Psychic Powers who winds up having to Save the World from an ancient evil that wiped out the legendary civilizations of the past. The game never met the levels of success that Secret of Mana or Chrono Trigger did, probably because it is short, but it is still well-remembered by many.

Illusion of Gaia describes its setting as the "age of exploration". In practice, it's that special blend of Medieval European Fantasy and Victorian Britain that Eastern RPGs are fond of mixing up, with an extra dash of the Victorian plus an emphasis on Landmarks of Lore and explorers. The father of our Kid Hero, Will, is one such explorer. Father and son went on an expedition to the Tower of Babel, but a completely mysterious something went wrong and only Will made it back home. How, he doesn't know, but it did awaken his psychic potential, whatever it was.

Aside from the ESP, Will is an ordinary schoolboy. At least, he is until the day he meets two people - Gaia, the spirit of the earth... er, "source of all life", and Kara, a runaway princess. Before long, Will is on the run from Kara's sovereign parents and trying to stop a doomsday comet under Gaia's direction, all while trying to reunite with his missing father. Will's journey takes him through an assortment of (16-bit renditions of) real-world sites, such as Macchu Picchu, the Nazca lines, Angkor Wat, the Great Wall of China, and Egyptian pyramids.

Is the Spiritual Successor to Soul Blazer. Considered part of a trilogy which also includes Terranigma.

Tropes used in Illusion of Gaia include:
Retrieved from "https://allthetropes.org/w/index.php?title=Illusion_of_Gaia&oldid=1687129"
Categories: