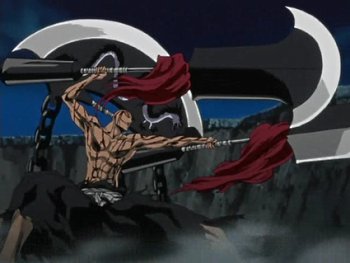 Kratos called. Even he thinks this weapon is insane.

Basically, this is about any weapon that is done just for Rule of Cool, since it is either impossible, unlikely, or impractical in Real Life.

Usually made from two methods: the Ninja Pirate Zombie Robot method (take a bunch of cool weapons and mash them together), and the Up to Eleven method (crank up the weapon's abilities).

This often relies on Art Major Physics of course.

A Sub-Trope of Rule of Cool.

Contrast Weapons Are Better tropes, which imply normal weapons are impossibly cool by themselves.

Examples of Impossibly Cool Weapon include:

Retrieved from "https://allthetropes.org/w/index.php?title=Impossibly_Cool_Weapon&oldid=1887010"
Categories:
Cookies help us deliver our services. By using our services, you agree to our use of cookies.