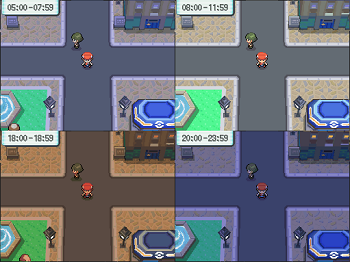 Yes, the guy with the green hair just stands there all day.

A common trope in video games is the passage of time, including day and night cycles. Depending on the game, this can either be an attempt at realism or a way to introduce other features (including a night-based variant of the Underground Monkey). The result is one or more of the following:

Of course, the time cycle seldom seems to affect the actual plot of the game (except in the case of a Timed Mission); events tend to happen at the appointed place no matter how long it takes for you to get there.

Contrast Take Your Time. NPC Scheduling is a subtrope.

Examples of In-Universe Game Clock include:

Retrieved from "https://allthetropes.org/w/index.php?title=In-Universe_Game_Clock&oldid=1946796"
Categories:
Cookies help us deliver our services. By using our services, you agree to our use of cookies.