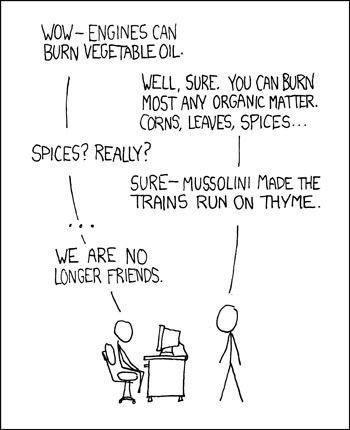 "I have nothing to apologize for."

A character (especially a Pungeon Master) makes a Pun, that is claimed to be so obvious or disgusting, that it makes listening characters wince, groan or even feel compelled to inflict violence on the punster — or, at least, bring a lawsuit against him for pun-itive damages. Rimshots are completely optional.

Since puns are considered one of the lowest forms of humor by default, this claim can be made even if the pun in question is actually really, really funny.

The chief purpose of this trope seems to be to allow a writer to deploy an awful groaner and still dodge the blame for it by pointing the karmic retribution at the character, or to use this acknowledgment as a piece of Self-Deprecation, turning this Lampshading into the joke's punchline, instead of just having the pun itself.

For other puns that may or may not be bad, see Hurricane of Puns and A Worldwide Punomenon. For a character that always makes these, see Pungeon Master. For an index of punny trope names, see Just for Pun.

Not to be confused with Stealth Pun, which refers to puns where the punchline is simply left to the readers or listeners as an exercise, and not to particularly groan-inducing and/or obvious puns.

Examples of Incredibly Lame Pun include:

Then, later in the fight:

Retrieved from "https://allthetropes.org/w/index.php?title=Incredibly_Lame_Pun&oldid=1703454"
Categories:
Cookies help us deliver our services. By using our services, you agree to our use of cookies.