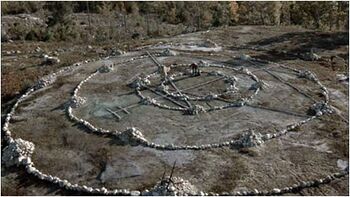 Looks like a great spot for a pet cemetary!

Remember last week when we dug up all those Indian bones and made puppets out of them?


It turns out they were buried over an Ancient Indian Burial Ground!
—Xkcd

A common explanation for supernatural goings-on in America, most commonly seen in movies: A Haunted House is built on an Ancient Indian Burial Ground. The disturbed spirits of the ancients of the land then enact their bloody vengeance against those who wake them by turning off the lights, making hooting noises, creating flies and maybe, if they feel up to it despite being dead, killing people.

Sometimes this isn't known or revealed until the end, sometimes it's known only to the greedy land developer who just doesn't care as long as he gets it cheap, or to people who don't believe in such nonsense but will by the end of the movie.

The reasons for the Ancient Indian Burial Ground are plenty. Burial sites are often connected with Ancient Elder Evil, and, in the USA, unless your definition of "ancient" is pretty flexible, that means Native Americans. Some tribes didn't give their burial grounds signs that they were graveyards, such as tombstones, memorials or rolling clouds of Ominous Fog. Native Americans are generally assumed to be more magical, and hence will have niftier ghosts. The plotline can play off both the concepts of the Savage Evil Indian of The Western, and that of the Compassionate Native Who Got the Shaft from Settlers (and then got an affordable three-bedroom home dumped on top of him). It's a good way to exorcise white guilt because, in some ways, all of America is an Indian Burial Ground.

Sub-Trope of Due to the Dead. Note that in many cultures, disturbing graves or other places related to the dead is regarded as dangerous.

This is a mostly a Discredited Trope, mainly due to most viewer's recognition of it. If it gets used, it's often at least slightly tongue-in-cheek, humorous, heavily lampshaded or subverted. Or maybe it's a remake. In any plot with something weird happening, a Genre Savvy character may theorize that it's due to Ancient Indian Burial Ground, even if they're in Europe or Asia [1] at the time.

Examples of Indian Burial Ground include:

Frankie: The camp is built on an Indian Burial Ground and-
Raz: Oh my gosh! Indians buried their dead here?!
Frankie: Ewwww! I hope not. No, stupid, they buried their arrowheads here.
Thus neatly handwaving why so many psitanium arrowheads, the currency of the game, are buried around the camp.

"You don't want this one. It was built on an indian burial ground. And there's a stuck tape."

"Ironically, there was an Indian burial ground built on top of the hotel!"

Lisa: An ancient Indian burial ground!
Bart: Wow, this place has everything!

Mr Burns: This house has quite a long and colorful history. It was built on an ancient Indian burial ground and was the setting of satanic rituals, witch-burnings, and five John Denver Christmas specials.
Homer Simpson: (shivers in fear) John Denver...

In our house, safe and sound-
Built on Indian burial grounds

Didi: Looks like someone's finally taking the Peytons' place.
Betty: Yep, must be nobody told them about the house being built on an ancient Indian burial ground.
Didi: Oh, Betty, that's just a myth.
Betty: Yeah? Tell that to the Peytons.