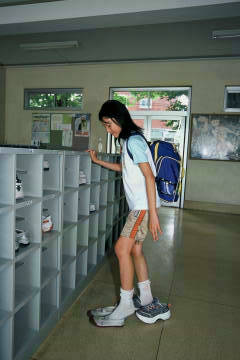 Called uwabaki, these are cloth-and-rubber slipper-shoes worn by Japanese students in school. Just as one changes out of one's shoes and into slippers upon entering a Japanese home, students change out of their "outdoor shoes" and into uwabaki upon entering school. Special lockers are provided to hold the students' shoes (these are frequently used as mailboxes for notes).

A student's grade level is often indicated by a colored stripe across the toes. Girls often add designs and colors to their uwabaki with markers in order to add some customization and individuality to their school uniforms. Anime with any significant time spent in school inevitably shows characters wearing "inside shoes", whose somewhat informal appearance (often simplified further to ease animation) can make a strange contrast to the more formal school uniforms.

Examples of Inside Shoes include:

Retrieved from "https://allthetropes.org/w/index.php?title=Inside_Shoes&oldid=1842485"
Categories:
Cookies help us deliver our services. By using our services, you agree to our use of cookies.