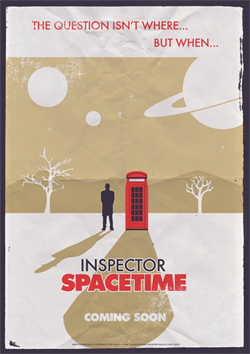 The Lunatic With a Booth

Inspector Spacetime is a British sci-fi series that has been on the air since 1962 and has gained a worldwide following. It's long since established its niche as a cult classic.

The Inspector is an alien from a faraway planet who has come to Earth to rescue us from dangers across space and time. He travels the universe in his snug X7 Dimensioniser time booth,[1] which takes the form of a red telephone box. (Fans nicknamed it, simply, the "Booth".) The X7 is famously "just a little too small on the inside," adjusting its interior dimensions to almost, but not quite, comfortably accommodate its occupants. Even when the Inspector is alone, the it retains its cosily cramped atmosphere. This is often alluded to as the reason that friendships formed in the Booth are the closest one ever makes. Even so, as the Inspector says, "There's always room for one more."

The Inspector often recruits Associates, most notably Constable Reginald Wigglesworth (Reggie). He has also amassed a Rogues Gallery of villains over the years that includes the Blorgons,[2] the Digifleet, and the Sergeant. Optic Pocketknife in hand, he will investigate the horrors of the universe.

The Inspector is the last of the Infinity Knights, the race of people who lived on his home planet of Kayaclasch. They once policed the universe with their advanced spacetime technological inventions, such as the time booths, but grew arrogant and corrupt in their twilight. They were destroyed by their war with the Blorgons, and the Inspector is the lone survivor... or is he?

Now, to ease his solitude and pass on his knowledge, the Inspector brings Associates along for adventures as he travels the universe, inspecting the roots of all its mysteries. He is a man who must often make tough decisions to meet his ends. Like all Infinity Knights, the Inspector was born without a heart, which explains his tendency to be cruel at times. His personal quest for a 'substitute' for this organ has so far been unsuccessful since duty and danger always come first. Still set on this goal, he often takes on Associates who are similarly searching for something or looking to improve themselves. Except Jeffrey. Everyone hates Jeffrey.

The Inspector's Associates provide something unique to the cast with each new addition, such as classic favourites the maths and English teachers Irma and Bart, the Gaelic swordsman Aiden, the late Jeffrey, the barbarian princess Reena, fellow Infinity Knight Lunda, the genius Yosif, the automatomcat FE-Line, and the long-runner Mary Sue. (There are a few forgettable ones, though, like the utterly nondescript Benjamin.) More recent Associates include Lily Taylor, Captain James Haggard, the Magnificent Bastard Yorke, Constable Wigglesworth, Angelica "Angie" Lake, and Rory Williams. The 2012 fiftieth-anniversary season has introduced the Eleventh Inspector's newest Associate: "temporary" constable Geneva Stilton.

The programme grew into a Long Runner despite Executive Meddling from producer British Television and distributor Boogatron Media, not to mention chronic underfunding, inconsistent script quality, archival carelessness amounting to sabotage, perversely wasted potential, and numerous other problems best left for another discussion. Eleven actors have taken on the iconic role of the Inspector so far, alongside literally dozens of Associates, in an ever-expanding cast. The sheer AMOUNT of canon there is to go through might cause some Archive Panic, but it's well worth the hours you'll spend with it.[3] is already an effort in motion to write actual episodes of this series found here

A second spin-off series, The Mary Sue Predicaments--far edgier and more thoughtful than its precursors—was recently cut short by the death of the lead actress.

A children's FE-Line series named simply FE-Line, produced by an unrelated Japanese television company, has been running for the past three years, and yes, that is where those strange vids of Giant FE-Line came from.

Not to be confused with a far less popular imitator.

The origin of this landmark television show requires detailed examination.[4]

Tropes used in Inspector Spacetime include:

Retrieved from "https://allthetropes.org/w/index.php?title=Inspector_Spacetime&oldid=1636980"
Categories:
Cookies help us deliver our services. By using our services, you agree to our use of cookies.