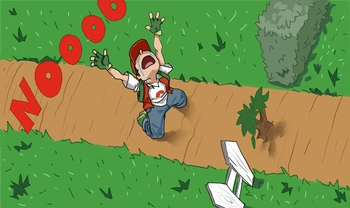 Insurmountable Waist Height Trees: Railroading you into following the plot since 1996

The phenomenon, found in countless video games, in which a seemingly trivial obstacle—such as a Locked Door—cannot be circumvented or removed with brute force, no matter how powerful the player character(s) is/are. This is more jarring when the obstacle in question does not mark the edge of the gameworld, but rather serves to force the player into taking a particular path.

The basic Insurmountable Waist Height Fence is an obstacle, usually between ankle and chest height, that the character(s) can't climb or step over simply because the game doesn't include such an action. Other common variations include:

In the most Egregious cases the level designers don't even bother with a token obstacle and just use a straight-up Invisible Wall.

Many examples could also be thought of as ordinary, non-insurmountable obstacles combined with Invisible Walls. In fact that is often how they are implemented in situations where the game can't just forbid the player from jumping, climbing, swimming or doing whatever it is a normal person would do to get by the blockage.

In extreme cases, a ramp might be used to make a one-way crossing over the obstacle to prevent backtracking, as if the player character was in an invisible wheelchair. This type of structure is called a Sawtooth by game designers; it applies to anywhere that stops the player going back after passing, and is often logical to the point it's hard to notice (a ladder collapses after you climb down, an elevator is disabled by a powercut, etc). Extremely shallow sawteeth are likely to be obvious, jarring and extremely ridiculous.

Examples of Insurmountable Waist-Height Fence include:

Retrieved from "https://allthetropes.org/w/index.php?title=Insurmountable_Waist-Height_Fence&oldid=1946812"
Categories:
Cookies help us deliver our services. By using our services, you agree to our use of cookies.