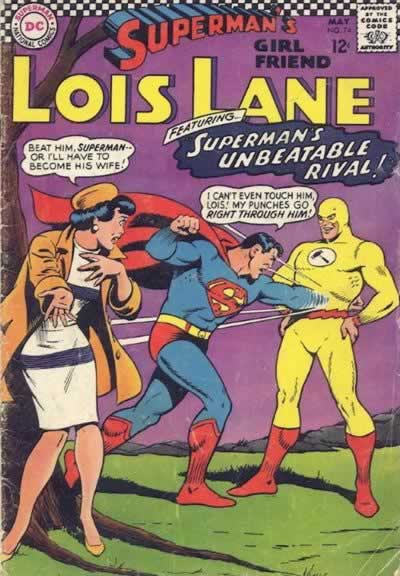 Cousin to Invisibility, the Intangible Man is unable to physically interact with normal objects.

For a hero, being an intangible man is a crisis. He has to save the day despite being intangible, before he starves to death or dehydrates. Asphyxiation is generally not an issue, and neither is movement. Don't ask why. If they're invisible as well as intangible, don't expect anyone to know that they shouldn't be able to see (if the light passes straight through them, it can't form an image on their retinas).

For a mentor, intangibility is an opportunity. Being a Spirit Advisor or Virtual Ghost lets them accompany the hero into dangerous places without ever being at personal risk.

The ability to render oneself intangible at will occasionally turns up as a superpower. These questions you have? Don't ask them. A truly Intangible Man would sink through the ground and yo-yo around the Earth's core forever. Although the Intangible Man will pass right through walls, chairs, tables and such, he rarely has any problem properly interacting with floors, stairs or any other structures people are meant to walk upon. He may even be able to ride vehicles, with the odds of success rapidly increasing with the size of the vehicle. Anything big enough to walk inside is quite likely, a ship or spaceship is more or less guaranteed.

It's sometimes explained that intangible characters walk on a thin layer of air, even though this should make them as frictionless as a puck in air-hockey. Potential breathing problems are typically ignored outright.

Note that once we've seen someone walk through the character, to establish the parameters of their intangibility, people will go out of their way not to walk through them too often, as this is an expensive special effect. This is usually justified as the experience being intensely creepy.

It is frequently a given that while no one else can touch them, two characters separately subjected to the same process will have no problem interacting with each other.

Sometimes the power can work selectively on the user's body (allowing him to voluntarily interact with objects while intangible) or extend further from the user's body (allowing him to make other objects and people intangible) Heroes use this ability to save their teammates from danger. Anti-heroes and villains use it to put their hands through people's chests and squeeze their hearts.

Examples of Intangible Man include:

Retrieved from "https://allthetropes.org/w/index.php?title=Intangible_Man&oldid=1485734"
Categories:
Cookies help us deliver our services. By using our services, you agree to our use of cookies.