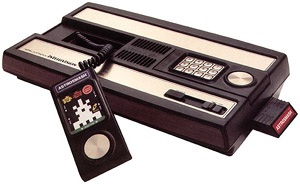 The Atari 2600 inspired other companies to enter the market for video games. One of these companies was Mattel Toys, which established the Mattel Electronics division to develop a video game console. The Intellivision was released to the public in late 1980; while it never defeated Atari for the hearts and minds of the public, it was the 2600's strongest initial rival, and hung around for some time.

The Intellivision is best remembered for its sports games because that's what most of its games were. In a famous advertising campaign of the time, George Plimpton proclaimed (and showed) that the Intellvision's graphics were superior to those of the Atari 2600. While the Intellivision could produce superior graphics to the 2600 (though the ColecoVision's graphics were still better), Mattel didn't have the game ideas on tap that Atari did.

Mattel had trouble securing the rights to produce home ports of Arcade Games: many popular titles had been acquired by competitors Atari and Coleco (who ended up porting many of them to the Intellivision anyway), and Mattel had to make a deal with then-obscure company Data East, with surprisingly good results. To compensate for its deficiency in arcade ports, Mattel invested heavily in rights to make Licensed Games, many of which were never developed or never released.

The Intellivision didn't use a joystick. It had a round, touch-sensitive pad and a 12-button keypad above it (games frequently included inserts that went above the pad to show how the buttons were used). On the down side, the controllers were permanently attached to the console, and games couldn't use the keypad and the control disc at the same time.

The Intellivoice add-on, though only four Intellivision games supported it, is of historical note in that it made the Intellivision the first console capable of voice synthesis. Other proposed add-ons for the console entered Development Hell; Jay Leno drew laughs at a Mattel function making fun of how long the keyboard add-on project was taking.

The Intellivision II, released in 1983, was not a new system, but a minor technical upgrade whose most remarkable "feature" was incompatibility with Coleco's previously released cartridges. Mattel Electronics also released the Aquarius home computer that year, promoting it with video games and other software; the Aquarius, being based on a technologically primitive design, handled both poorly and was quickly discontinued.

Mattel Electronics was one of the first casualties of The Great Video Game Crash of 1983, shutting down operations in early 1984. Interestingly, a former Mattel exec ended up buying the rights to it, and the new company (INTV Corp.) was able to sell the console and a few new games via mail order, until it too succumbed and went out of business entirely in 1991. Ultimately, the rights were sold to a former game developer who formed Intellivision Productions, which continues to license Intellivision properties to this day.