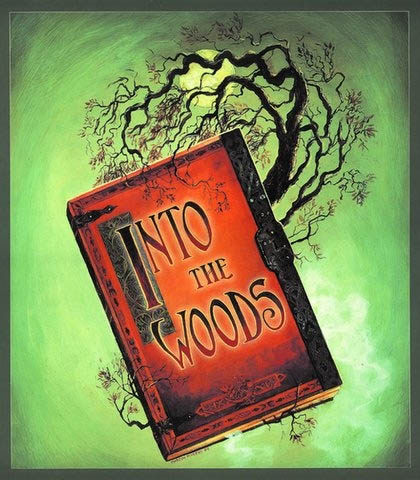 Musical by James Lapine and Stephen Sondheim that weaves together the fairy tales of Cinderella, Jack and the Beanstalk, Little Red Riding Hood, and Rapunzel.

In the first act, a baker and his wife who desperately want a child are told by the witch who cursed their family with infertility that she'll lift the spell if they do something for her first. She sends them on a quest that takes them in and out of the other stories, collecting Cinderella's slipper, Jack's cow, the little red riding hood, and some of Rapunzel's hair. There's also a mysterious old man who appears from time to time, trying to help the quest along for reasons of his own. After a certain amount of deception, theft, and murder -- you remember how these stories go, right? -- everybody gets what they were wishing for at the beginning, and there's a big song-and-dance number about living happily ever after.

Then in the second act, everybody has to grow up and face the consequences of their actions.

The show is one of Sondheim's most famous, alongside Sweeney Todd: The Demon Barber of Fleet Street and Company. In the year dominated by Phantom of the Opera, it was able to snag three Tony Awards, for Best Score, Best Book, and Best Leading Actress (Joanna Gleason as the Baker's Wife). The original Broadway production has since been followed by a notably contentious revival in 2002, as well as numerous productions across the country at everywhere from the regional to the high school drama level.

Many people are most familiar with the excellent version filmed by PBS under its American Playhouse banner in 1991 and subsequently released on home video; this was based on the original Broadway production and had most of the same cast.

A film version directed by Rob Marshall (Chicago and Pirates of the Caribbean 4) and starring Anna Kendrick, Chris Pine and Emily Blunt was released by Walt Disney Pictures at Christmas 2014.

Tropes used in Into the Woods include:

"Yes but even one prick, it's my thing about blood!"

Witch: What's the matter?
Rapunzel: Oh, nothing! You just locked me in a tower without company for fourteen years, then you blinded my Prince and banished me to a desert where I had little to eat, and again no company, and then bore twins! Because of the way you treated me, (cries) I'll never, never be happy!
Witch: (Beat; defensive, yet sincere) I was just trying to be a good mother.

Cinderella's Prince: "I shall always love the maiden who ran away."
Cinderella: "And I, the faraway prince."