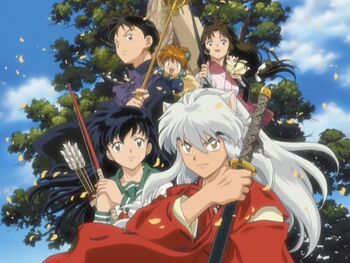 Inuyasha is an enormously popular Anime based upon the similarly popular Manga of the same name by Rumiko Takahashi. Seven seasons totaling 167 episodes were made and shown on Japanese television, with the series ending in September 2004 in Japan. Adult Swim aired the final episode of a very decent English-language dub in October 2006, and the series continues to air in the very early Sunday morning slot, where it has been airing continuously since the series' end (the only other show to have run longer on Adult Swim is Cowboy Bebop). Inu-Yasha and friends appear in the Massive Multiplayer Crossover game, Sunday VS Magazine Shuuketsu Choujou Daikessen.

Typical Japanese teenage Ordinary Middle School Student, Genki Girl Kagome, granddaughter of a Shinto priest, has the ability to climb down into an ancient well on the grounds of her grandfather's shrine and, in doing so, Time Travel to allegedly-feudal-Japan, except for the fact that demons, goblins, vengeful ghosts, malevolent wizard-priests, short-tempered twelve-foot-tall ogres, and all manner of other creepy-crawlies[1] are all over the place and you can barely swing your arms without hitting one of them. Another noteworthy difference from most anime is that almost all of the characters who are supposed to be Japanese humans are actually depicted with black hair. If you've seen just a bit of anime, you might recognize how unusual this is (other Hair Colors are much more common).

One of the first characters she meets is the titular Bishounen Inuyasha - an obnoxious, abrasive, arrogant half-demon teenage boy with long flowing white hair and super-cute doggy ears on top of his head; his father was apparently a dog-demon with a taste for human women. Inuyasha, needless to say, actually has a heart of gold, though he requires Kagome's insistance to do good deeds. You all knew that was coming, didn't you? Right? Right.

Oh, and did we mention that Kagome happens to be the Reincarnation of the Miko that Inuyasha once loved 50 years in his past, who just happened to be the one who fired a sacred arrow which sealed him to the sacred tree, essentially killing him?

Kagome's arrival in the past is pivotal in that she is the one who releases Inuyasha from his "death" by pulling the arrow from his chest. Her connection with his past love allows her to perform this otherwise impossible feat.

In addition to the romance angle between Inuyasha and Kagome, there is an overarching plot about Kagome and her adventuring companions wandering pseudo-medieval-Japan in order to collect the pieces of the shattered Shikon no Tama/Jewel of Four Souls, but the overall structure of the show is very much episodic.

There is also the plot thread concerning the evil incarnate that is Naraku, a human-turned-demon that seeks the Shikon Jewel in order to taint it and become a full-fledged demon with powers far beyond anything any demon has ever known. Over the course of the series, Inuyasha and company confront Naraku several times, but each time he gets away, gaining more shards of the Jewel - and an extra power or two - in the process.

Naturally, Status Quo Is God (no matter how much it seems like things are building towards a resolution), and the anime was consequently Cut Short with no proper ending, due in large part to the anime actually catching up with the production of the manga (and thus running out of episodal stories to do). The remaining chapters of the manga that the anime didn't cover before its abrupt end were adapted into the 26-episode series Inuyasha: The Final Act, which picks up where the original anime left off and tells the remainder of the manga's story through to its conclusion.

Viz has posted a licensed subtitled version of Inuyasha online on Hulu. For those who can't wait for the dub of The Final Act, a sub for it is also available.

A sequel anime Hanyou no Yashahime was announced in May 2020 for release Fall of 2020.

Tropes used in Inuyasha include:
Retrieved from "https://allthetropes.org/w/index.php?title=Inuyasha&oldid=1962283"
Categories:
Cookies help us deliver our services. By using our services, you agree to our use of cookies.