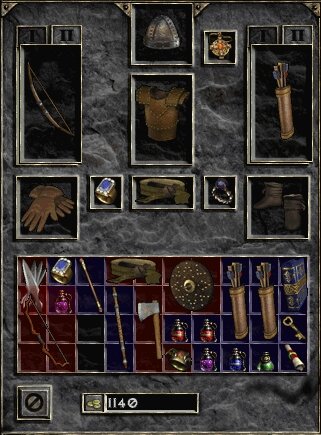 Frig. Maybe if I put the knives beneath the wand, and move that potion up...

How many things can you carry on your person? If your life depended on it, do you think you could manage just one more?

There are lots and lots of practical reasons that a game might want to place some bounds on your carrying capacity. For one thing, like everything else, there's only a finite amount of memory to track inventory, and only a finite amount of screen space to show it, in accordance with the game's particular idiom. Also, there's the matter of the Combinatorial Explosion. Limit what the player can carry, so that he isn't hauling around objects that will make the designer's life hard in the future.

And then, there's the games which limit your inventory because the game designers wants to make inventory management a part of the game, to force players to manage another resource. At the simplest level, this is managed by simply limiting the number of items. So, you can carry around only a handful of items. A common abstraction is to define inventory in terms of weight, with (nearly) arbitrary weights assigned to each item. To make matters worse, if a notion of item size exists at all, it's sometimes very coarsely defined: either you can carry eight items, whether the items are paper clips or pianos, or you can carry eight "units" of equipment, but one unit is "anything smaller than a breadbox," and two units is "A BFG."

There are many reasons the game designer may have for imposing this inventory limit, such as:

To make matters worse one of the things that keeps our limited carrying capacity in real life from being too onerous a burden is the fact that we can set things down. Far too often, a game will impose an inventory limit, but not implement any sophisticated notion of chucking stuff on a shelf or table, sticking it in a cupboard, or otherwise leaving it wherever you happen to be at the moment. Far more popular is to limit the player to only abandoning inventory items at certain special locations, or only giving the player the option to discard items outright, removing them from play altogether. If the designer decided to allow the player to drop things wherever he likes, dropped items may yet be subject to Everything Fades. The ability to transport more items in a vehicle is also often left out.

At least within the hobbyist community, game authors who impose an inventory limit to genres which usually do not feature them will often feel the need to justify this, claiming to have "always been bothered" by the blatant unrealism of unbounded carrying. Strangely, players who do not go on to write games which feature an unreasonable inventory limit never seem to have trouble with this.

It is also worth noting that not all inventory limits annoy the player. However, the absolute best a limited inventory can do in the mind of the player is to be noninvasive. A player may finish a game and say "The inventory was limited, but it never really bothered me," but it is exceedingly unlikely that a player has ever finished a game and said, "Wow, my play experience was really improved by the fact that this game had an inventory limit." Of course, as with many tropes, not every player appreciates their use even if they do enhance and improve the gameplay.

One positive effect of imposing inventory limits on a player is to limit hoarding. In general, when players find things, they keep them, unless they have an immediate need for money, in which case they sell them. Players only use items that are in limited supply when absolutely needed (and in the case of stuff Too Awesome to Use, not even then). A limited inventory is a way to suggest to a player that they should be using more stuff. That is, shooting more, using more health potions, etc. And even if the player can't acquire any more consumable items, it isn't a problem (with a sufficiently large inventory) because that means the player is well-stocked for the next portion of the game. Typically, the problem with inventory happens when you have to drop key items or drop a box of 10 shotgun shells knowing full well that you're going to need them in the next 5 minutes.

Remember, Tropes Are Not Bad.

The Inventory Management Puzzle is actually well known in applied mathematics and computer science circles where it goes by the name of The Knapsack Problem. The Knapsack Problem is defined as given a set of items, each with a weight and a value, determine the count of each item to include in a collection so that the total weight is less than or equal to a given limit and the total value is as large as possible. It derives its name from the problem faced by someone who is constrained by a fixed-size knapsack and must fill it with the most useful items. Unfortunately what makes the Knapsack Problem well known is that it an exemplar of a class of problems that are inefficient to solve in the general case. This means that the best method to solve the problem is to try every possible combination and see which one works best.

See also Grid Inventory. This trope is reducible to the Traveling Salesman trope.

Examples of Inventory Management Puzzle include:

Retrieved from "https://allthetropes.org/w/index.php?title=Inventory_Management_Puzzle&oldid=1835362"
Categories:
Cookies help us deliver our services. By using our services, you agree to our use of cookies.