Everything About Fiction You Never Wanted to Know.
(Redirected from Iron Grip)
Jump to navigation Jump to search 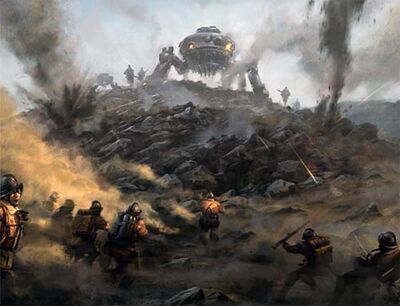 In the grim-dark present of an ancient steampunk world, there is only war...

Iron Grip: The Oppression is a 2006 Total Conversion for Half Life 2 by indie game developer Isotx, set in the Steampunk and Dieselpunk-themed fictional universe of Iron Grip. It features urban guerrilla warfare by combining elements from two different genres. A player can choose one of two sides in this game, the Rahmos City Guard or The Resistance. The Rahmos side is a Real Time Strategy game, generally played by a single player (or a very small number of players in large games). The Resistance side is played as a cooperation of several players, each playing a First-Person Shooter in a very similar manner to HL2. Available here.

In 2008, it received a full-blown stand-alone sequel (built in a heavily updated version of the older idTech3 engine), titled Iron Grip : Warlord. It's more of the same concept (Ragtag Bunch of Misfits guerilla fighters vs. The Empire), but adds a more Tower Defense feel to the RTS element of the game. As in Opression, the sequel is aimed primarily at co-op gameplay between human players, but offers various other multiplayer modes as well.

The third game in the series, a Free-To-Play multiplayer TBS called Iron Grip : Marauders, is currently available on Steam since September 30, 2011.

Tropes used in Iron Grip: The Oppression include:
Retrieved from "https://allthetropes.org/w/index.php?title=Iron_Grip:_The_Oppression&oldid=1637088"
Categories:
Cookies help us deliver our services. By using our services, you agree to our use of cookies.