Irritation Is the Sincerest Form of Flattery 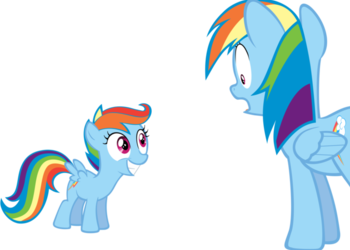 "Um Scoot, don't you think you're taking this just a little too far?"

A common plot in kid's shows, when a character (usually lacking in self-confidence) begins to imitate someone they look up to, down to what clothes they wear and what foods they eat. For the one being imitated, this usually gets old very, very fast after the novelty of having a lookalike wears off, and the rest of the episode is usually dedicated to getting the imitator to stop and rely on himself or herself instead. However, sometimes this backfires, and rather than learn anything the imitator will just switch to a new target.

May overlap with Hero Worshipper and Heroic Wannabe. Also a common cause (and effect) of Poser Hating. If this continues for too long it can turn into I Just Want to Be You, with the difference being that this trope is usually a temporary state of affairs and generally Played for Laughs.

See also Sincerest Form of Flattery, which is a meta-trope about Word of God admitting to copying from an earlier influence on their work.

Examples of Irritation Is the Sincerest Form of Flattery include: