Everything About Fiction You Never Wanted to Know.
(Redirected from Isekai no Seikishi Monogatari)
Jump to navigation Jump to search 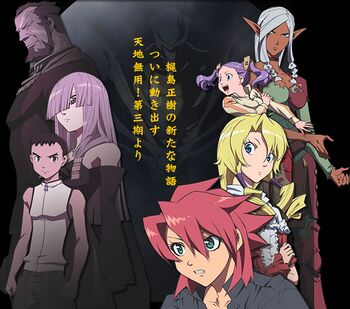 Tenchi Muyo! War on Geminar (Isekai no Seikishi Monogatari) is a Canon Spin-Off of the original Tenchi Muyo! Ryo-Ohki OVA series, and takes place 15 years after Tenchi Muyo! GXP. The main character, Kenshi, is Tenchi's younger half brother and the anime depicts him being forcefully taken from his home and his family by unknown forces, and sent to a new Alternate Universe on a planet called "Geminar". There are a few thinly-veiled references and nods to the Tenchi Muyo series while Omake material released in Manga, Novel and Doujinshi formats expands the series and further fleshes out the overall story (something Masaki Kajishima is well known for).

At the beginning of the show Kenshi has been told he needs to help with an assassination plot in return for going home. The target of assassination is the newly-crowned queen of one of the lands in this world. When faced with killing a girl roughly the same age as him he can't do it. Eventually, he ends up being a servant of the queen while she is attending a super elite school that serves both the nobility and the pilots for the somewhat organic looking super robots. Being the little brother of the guy who pretty much made the Harem Genre what it is today, it doesn't take long before the good ole Masaki-charm goes to work. Soon, Kenshi is being chased by almost every girl in the school... literally.

First started airing in 2009 and was released in OVA format, one episode a month. It also aired on television through Japanese pay-per-view service, although the first episode was later "enhanced" with extra scenes for the Blu-Ray release.

Tropes used in Tenchi Muyo! War on Geminar include:
Retrieved from "https://allthetropes.org/w/index.php?title=Tenchi_Muyo!_War_on_Geminar&oldid=1878087"
Categories:
Cookies help us deliver our services. By using our services, you agree to our use of cookies.