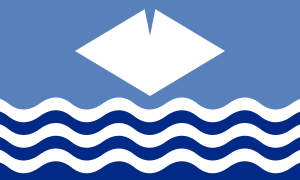 The Isle of Wight is an Island off the South Coast of England, approximately diamond shaped in form and can only be accessed by Ferry (mostly, and see below about that). Once its own Kingdom for short time, now a full part of the United Kingdom. Its major industry is tourism and has been known as a holiday destination since the Victorian Era. Also known for its fossils, many which have come up in the West Wight, on the Western side of the Island.

The only real way to get to the Isle of Wight is by ferry. Fares are expensive in terms of distance (the most expensive piece of water in the World, no less) and are divided up between three routes and three operators:

Once on the Island, Southern Vectis are the major bus operator covering most of the Island. Owned by the Newcastle-based Go-Ahead Group from 2006, SVOC is an expensive - and the only - bus service on the Island (as it has been since the 1970s). Despite the high fares, Southern Vectis actually has a more modern fleet than most of the country, and is well-regarded in the industry for it's publicity, and for running buses even on Christmas Day.

And by Rail? A lot less than before Beeching (but even before then lines were being closed), the Island’s Rail Network is down to one line between Ryde Pier Head (yes, trains on the Pier) and rumbling down the Eastern coast of the Island to Shanklin. The line used to go down to Ventnor and into a rather unique station, but that was closed in 1966.

Anyway, continuing the Island’s traditional use of old rolling stock, the current trains are 1938 London Underground Stock due to clearance problems on the tunnel in Ryde. Now owned directly by Island Line and a bit of an enthusiast line, with trains running in a version of their original livery, There is also Isle of Wight Steam Railway, running from Smallbrook Junction to Wootton Bridge. Owns the last of the second-hand Island steam trains named Calbourne (an LSWR O2) and some ex-WD locomotives and a load of Island carriages (also second-hand. That is a theme for the Islands railways - nothing’s new).

There’s a small airport at Bembridge where the Islander aircraft is made by Britten-Norman. A few air services have been tried but nothing came of it.

And the roads? Apart from a few main roads, and 1/2 mile of dual carriageway in Newport, it’s good to remember that Island Roads are Different.[1]

Not to be confused with Our Wights Are Different.