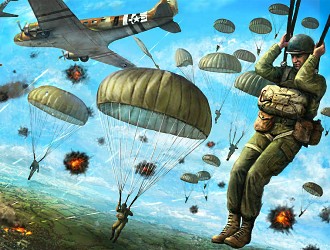 Simply put, people falling from the sky, or at least a great height, then landing safely, at least for them. This is accomplished in Real Life via parachutes or gliders, but in Speculative Fiction it can be done through Powered Armor, Jet Packs, special pods, or Applied Phlebotinum - or, if you're indestructible, a "hard drop" using only the ground to break your fall. Usually an airplane is involved, but balloons, cliffs, a Standard Sci-Fi Fleet, a tall building, or even a magic castle will do.

Has nothing to do with the song it takes its name from.

A Super-Trope to Drop Pod.

Examples of It's Raining Men include:

[Eddie is falling; Mickey Mouse and Bugs Bunny, both wearing parachutes, join him]
Bugs Bunny: Eh, what's up, Doc? Jumping without a parachute? Kinda dangerous, ain't it?
Mickey Mouse: Yeah. You could get killed. Heh, heh.

35. Not allowed to sing "High Speed Dirt" by Megadeth during airborne operations. ("See the earth below/Soon to make a crater/Blue sky, black death, I’m off to meet my maker")

Zoidberg: We'll be safe as long as we stay out of the methane swamps! *lands in swamp, sniffs* What smells like methane?

After the demise of the best Airborne plan, a most terrifying effect occurs on the battlefield. This effect is known as the rule of the LGOPs (Little Groups of Paratroopers). This is, in its purest form, small groups of pissed-off 19 year old American paratroopers. They are well trained. They are armed to the teeth and lack serious adult supervision. They collectively remember the Commander's intent as "March to the sound of the guns and kill anyone who is not dressed like you" - or something like that. Happily they go about the day's work...