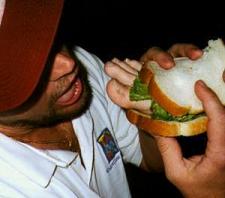 For some reason, people tend to describe foods that taste terrible in terms of things that no sane person has any right to know what it tastes like.

The name comes from the episode of Friends where Rachel accidentally combines an English Trifle and a Shepherd's Pie, making the world's first (and hopefully last) Shepherd's Trifle. See it here. Meat, onions, whipped cream and jam? And just how would Ross know what feet taste like? A sister trope to Lethal Chef.

In Real Life, some examples of this trope are physiologically justifiable. On its own, the tongue is only capable of detecting a few basic tastes - salty, sweet, bitter, sour, savory. The more subtle and complex flavors associated with foods are actually due to the sense of smell, as aromatic molecules travel from the mouth up into the nasal cavity from behind. Thus, the smell of a non-food item can often be considered a reasonable guess as to its flavor. Of course, this only works for concrete examples of the trope ("this tastes like shit"), as opposed to more abstract/metaphorical uses ("this tastes like death").

Also, some people probably would know what feet taste like, such as Quentin Tarantino, or Joss Whedon.

Contrast with Tastes Like Chicken. Not to be confused with an instance of someone actually tasting a foot. Or metaphorically tasting their foot. If someone is really eating a foot, then the trope might be I Ate What?

See also Tastes Like Purple, for things it shouldn't even be possible to taste. May or may not be invoked for Foreign Queasine or A Tankard of Moose Urine.

Retrieved from "https://allthetropes.org/w/index.php?title=It_Tastes_Like_Feet&oldid=1825541"
Categories:
Cookies help us deliver our services. By using our services, you agree to our use of cookies.