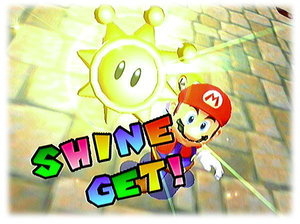 Cue the victory pose, the triumphant Fanfare, the dramatic camera angle. What just happened? Did the hero beat the Big Bad, rescue the Damsel in Distress and restore the Cosmic Keystone?

...No. He just got the Plot Coupon he needed for a minor Fetch Quest.

In some games, collecting items is Serious Business, with the merest trinket awarded the same dramatic significance as the hero's +10 Sword of Plot Advancement. Not all games apply this trope to such ridiculous levels - most rewards, upgrades and the like are well deserving of the fanfare they're presented with - but where else but in the wild world of video games could a boomerang, a necklace and a chicken all get exactly the same reaction from the protagonist?

Related to Mundane Made Awesome.

Examples of Item Get include:

The intense Dragon Warrior 2 gaming experience is made even more exciting when the game announces you have found something. When you sneak into someone's house and open their secret treasure boxes they keep in the living room, the game screams, "Fortune smiles upon thee! Thou hast found a broken pot!" And when you find something good, the game goes into pleasure convulsions and shuts down the Nintendo in an orgasmic seizure. That's why I could never find the good sword and had to beat the game with the Battle Twig and the Saucepan Hat.