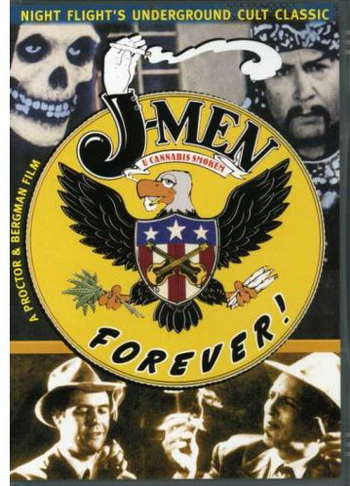 Firesign Theatre's most successful production was this Gag Dub homage to the Republic Film Serials of the 1930-50s. The villainous Lightning Bug schemes to conquer the Earth with Sex, Drugs and Rock and Roll, and only the J-Men -- a dedicated team of tight-assed straights...err, straight-jawed men-in-tights -- can stop him!

J-Men Forever! can be purchased on DVD at Laugh.com, or can be found on YouTube with a judicious search that probably includes the terms "j-men" and "forever".

Tropes used in J-Men Forever! include:

Evil Nazi: "Welcome to the Hot Hitler Disco, where the beat never Gestopos. If we can't spring some info from you, we'll make you listen to Donna Summer all winter, until you fall."
Spy Swatter: "Anything but that, fiend!"

"I'm going to have you wrapped in the U.S flag and burned personally by the President, in high-octane American gasoline!"

(An informer is making a secret call to J-Men headquarters when the Lightning Bug bursts in on him)
The Bug: "Ah-HAH! Making personal calls on MY line!"
(The Bug zaps him with his ray-pistol. On the other end of the line, smoke pours from the phone held by the Chief)
The Chief: "Hello? Operator? Listen, we were cut off in the midst of a hot tip. I want to make sure we weren't charged for that call."

The Bug: "Turn it up! More juice, Bruce!"
Mook: "But you're mad -- the Moon is being destroyed!"
The Bug: "You don't know good music when you hear it!"
(Rocks Fall, Everyone Dies)
The Bug: "That's what I call getting stoned!"

Lone Star: (singing) "I'm a super copper on a super chopper! There's no job too dangerous or small for me! I'm the pro-tec-torrr..." (leaps a canyon on his motorcycle and lands hard on the other side) "Uuuugh!!! Owww I forgot my protector..."

Caped Madman: "Dirty towelheads!"
Arab troops: "Wait, we're on your side! We're with the U.N!"
Caped Madman: "U.N., hey? I'll show your what we think of you One Worlders!" (machine-guns them In the Back)

Spy Swatter: "Drugs are being smuggled out of your country by a hooded hood called the Lightning Bug."
Captain Duran: "It's true; some of our troops have even been growing marijuana in window boxes!"
Official: "Gentlemen, this is incredible...do you realise how butch you two look together?"

Barton: "That kook said something about aliens being behind the whole thing."
The Chief: "Aliens? Suuure. Listen, Mexicans and Canadians are always a problem. Next thing you know they're going to be blaming it on little guys in shiny suits from Outer Space!"

"ARRGH! You sadistic bastard, you crushed my skull!"
...
"Moonbase has been destroyed, taking the Lightning Bug and all his henchman with it, and New York City has been wiped off the face of the Earth. A double victory!"
...
"The air assault against the dope fiends will be led by our flying ace in the hole; yes, we're putting our Duke up! He knows how to handle any John or Jane who's driving around with a roach in their roadster. And our rock & roll attacks will be co-ordinated by our new Commissioner of Culture -- Puke Earwax! He knows the Bug's pirate radio station can be hidden in the innocent looking farmhouse, the suspiciously innocuous orphanage, the inconspicuous summerhouse. And as a last resort we'll defoliate every forest and park, incinerate every private garden, balcony and window box, to ensure that this marijuana menace will never take root here again!"

"THIS IS THE MAYOR OF NEW YORK CITY. WE ARE UNDER ATTACK BY HIDEOUS WAVES OF ROCK MUSIC FROM THE MOON! ALL RESIDENTS ARE REQUESTED TO FLEE MINDLESSLY, WHILE MEMBERS OF THE POLICE AND FIRE DEPARTMENTS WILL ASSEMBLE IN THEIR UNION HALLS FOR CONTRACT NEGOTIATIONS! THIS IS A RECORDING."

Juicy Winters: "This kind of music could get me pregnant."