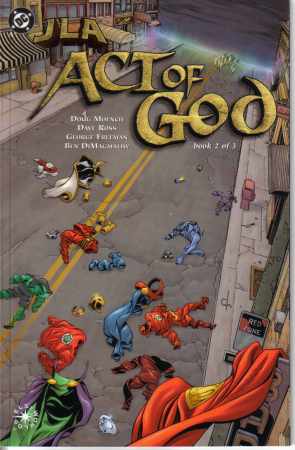 Note the naked superheroes in the top right corner.

JLA: Act of God was a 2001 DC Comics Elseworlds storyline by Doug Moench about heroes everywhere losing their powers and learning to live with it. This story was somewhat different from other DC Elseworlds which normally recast the heroes in completely different times and places, rather being set in a copy of the then current DC Continuity (similar to the What If stories at Marvel).

One day, all the heroes and villains are shown going about their business. Superman is fixing a dam, Green Lantern is battling a supervillain and so forth. Then suddenly a large mysterious purple energy wave sweeps over the planet causing everyone to lose their powers except for normal crimefighters and tech-based heroes (or so it is claimed, the story is pretty inconsistent about it. Read about it down below). After very little investigation, nobody can figure out how it happened and the world begins to adapt. Mostly.

Superman becomes despondent, seemingly traumatized over the last disaster he was unable to prevent as his powers were fading, and is seen doing nothing but moping all day, to the point that Lois leaves him, causing him to go mope with Wonder Woman, until she finds . . .God. . . and becomes a stock broker. Green Lantern can't get over his defeat by Sonar and, after months of rampaging around his apartment, begins channeling his aggression into a boxing bag looking for a rematch. The tech-based heroes, consisting of Steel, Blue Beetle and Booster Gold, each in turn lose their tech or have it stolen. Supergirl (Linda Danvers) tries joining the police force, but is frustrated with all the paperwork that comes with fighting crime "by the book."

Eventually, Aquaman, Martian Manhunter, Flash, and Supergirl all decide to go to Batman, concluding that the Badass Normal school of crimefighting is the only option they have left. And thus a new generation of heroes is born.

This story has come under criticism for accusations of Character Derailment (Superman's endless moping, Wonder Woman's turn to Catholicism), Plot Holes (like why Green Lantern's ring doesn't work if tech is still functional), and the event itself which is basically a giant A Wizard Did It due to it depowering a large variety of heroes who got their powers for different reasons from different sources.

Tropes used in JLA: Act of God include: