Everything About Fiction You Never Wanted to Know.
Jump to navigation Jump to search
/wiki/Jack Blackcreator 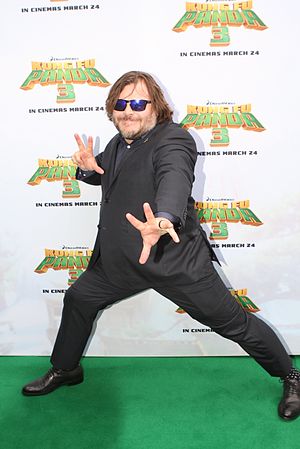 What happens when a Large Ham meets The Power of Rock.

Thomas Jacob "Jack" Black is an actor, comedian, and musician. Best pals with Kyle Gass. Together, they formed Tenacious D!

Black appeared in an un-aired pilot episode for a show directed by Ben Stiller and written by Dan Harmon and Rob Schrab called Heat Vision and Jack where he played an ex-astronaut pursued by actor Ron Silver. He was accompanied by his friend who had merged with a motorcycle, voiced by Owen Wilson. This pilot led to his friendship with Harmon and Schrab that resulted in him making many cameos for Channel 101.

In 2000, Black appeared in High Fidelity as a wild employee in John Cusack's record store, a role which Black himself considered his breakout, the film also reunited him with Tim Robbins, who had appeared with Cusack and Black in Bob Roberts eight years earlier.

King Kong can be considered his first serious role, though he mellowed down a bit in The Holiday and Margot At The Wedding. However, at the beginning of his career, he did appear in bit parts in serious films. For example, in Dead Man Walking, he plays the brother of Sean Penn's death row inmate, and in Enemy of the State he, along with several other comedians, make up the tech crew of an NSA operation.

He is a member of the Frat Pack, a group of comedy actors who frequently work together, which also includes Owen Wilson, Luke Wilson, Ben Stiller, Will Ferrell, Vince Vaughn, and Steve Carell.

Black's comedic style combines many key elements from both sides of the traditional double act. Black typically begins a skit in which he presents an earnest introduction to a premise or subject that quickly reveals itself to be flawed or fundamentally ludicrous. Black then switches completely to a far-extreme caricature of human emotion. His would-be straight-man Gass often functions to trigger these outbursts. When appearing in a movie that turns out to be a flop, he even manages to make it bearable through his appearances alone- his role as the villainous bully in The Neverending Story III was claimed by many to be the only good thing about it.

Not to be confused with the Victorian-era rat-catcher of the same name, Black Jack, or Jack Noir.