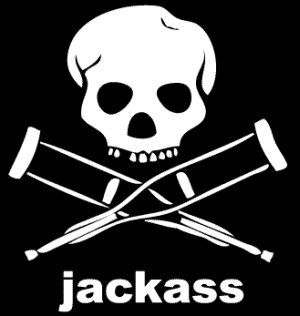 "Because it was funny."
—Ryan Dunn's explanation for stabbing Bam in the ass with a hot iron brand[1]... or, more accurately, the reason this show exists.

"Neither you nor your dumb little buddies should attempt anything you see on this show."

Jackass has its roots in skateboard culture and the skateboard magazine Big Brother, and Bam Margeras's humor/stunt video series Camp Kill Yourself (or CKY). One of Big Brother's writers was struggling actor Johnny Knoxville, who pitched an article for Big Brother about being used as human guinea pig for various self-defense weapons, culminating in him being shot in the chest to test out a bulletproof vest. His editors decided to film the test and found it so funny, that they decided to commission several additional masochist-themed videos with the rest of the staff (including Dave England and Chris Pontius) and ex-Ringling Brothers clown Steve-O contributing material.

Similar material was being filmed by Bam Margera and his gang of skaters and his parents. Their material would make up the first CKY video, titled Landspeed: CKY. The two ultimately decided to combine forces when Big Brother magazine began talks with Spike Jonze to create a pilot for MTV. Along with Ehren McGhehey, an ex-snowboarder, Jackass was born.

Media Watchdogs and Moral Guardians more or less had panic-induced heart attacks at the very thought of their kids watching this one, so there was a huge movement to get the show canned (which, ironically, may have increased its popularity even more!).

The format was popular enough to spawn three movies, the third in 3D, which allowed the boys to really go hog wild with the R rating. Also, several cast members were given spin-off shows, ranging from Bam Margeras's Viva La Bam and the And Now for Something Completely Different nature spin-off Wildboyz.

Tropes used in Jackass include:

"Is it wrong to be strong? You be the judge."

Bam: What rhymes with Dunn? Fun!

Knoxville: So, what's the record for fastest knockout?
Butterbean: Um...the California state record is 18 seconds--and that includes the ten-count.
Knoxville: (timidly) I think you're gonna break that record today...

"It looks like you've got Jimmy Durante's nose in your pants!"

Wee Man: Check it out, there's a map to Mianus.
Chris Pontius: I don't need a map. I know Mianus better than any man, woman or child.

[Negative reviews of Jackass: The Movie appear] Unfortunately for [the critics], we just made Number Two. (Spike Jonze promptly flashes the camera dressed as an old lady)

Bam: Here we are at some random-ass ranch, and this is "The Brand." And it's gonna suck...

Steve-O: (hesitant) I'm Steve-O...(whimpering) Why do I have to be Steve-O? I really don't wanna be Steve-O right now...