"Inside a cell or inside the city, walls surround us both. We are all his prisoners."
—Kor to Jak, establishing the world he's stuck in now. 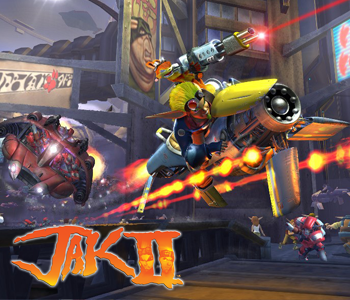 The Darker and Edgier second installment of the Jak and Daxter series.

The sequel starts as Jak and co. activate the device they found at the end of the first game -- which not only releases an army of horrific creatures into their world, but also catapults them hundreds of years into a twisted future version of their world, where they are stranded in the totalitarian empire of Haven City. Jak is immediately captured by the despotic Baron Praxis and used as a guinea pig for his horrific Dark Eco experiments, in an attempt to create a weapon strong enough to destroy the Metal Heads, the very creatures Jak unintentionally unleashed into the world in the first place.

Two years after arriving, Daxter finally finds Jak and frees him from the prison--only to discover that his time spent there, as well as the Baron's eco experiments have not only turned Jak into a bitter, distrusting fellow, but have also granted him a new, destructive Dark Jak form, which threatens to destroy him from within unless he learns how to control it. Oh, and he talks now. Along the way, Jak sides with the underground movement of Haven City in an attempt to overthrow Praxis -- although in Jak's case, he's just in on it to get revenge on him. Throughout the course of the game, it goes from merely a rebellion against Praxis, until it evolves into a much larger plot involving not only the Metal Heads, but the very balance of time and life itself!

To say that the sequel was near-universally seen as an improvement over the original would be a total understatement -- the world was even more elaborate and interesting than ever -- the collect-a-thon and eco gameplay was completely eschewed in favor of mission-based gameplay, while still mixing in some healthy platforming segments throughout the game. There was much more variety in gameplay -- you could use guns, Jet-Board through the city, hijack vehicles (à la Grand Theft Auto), pilot a mech suit here and there, among other things. The difficulty was beefed up considerably, but this may have been a response to the original game's low difficulty. The story was vastly improved, with much more characterization and more plot twists than you could shake a stick at. While the game didn't sell as well as the first game, it still did well enough to be considered a hit and received universal praise from critics and gamers.

Tropes used in Jak II include:

Oracle: I sense there is a dark rage burning within you, and in time, it'll destroy you with its madness.

Samos: It's perfect, Keira. This is the very machine we found.... or, will find, later.
Keira: What? I just built this! After seeing the first one, I mean. It's based on what I remember from--
Daxter: Honey, the more you think about it, the more it hurts the head.

Krew: I wouldn't get too comfortable if I were you. *looking at Daxter* Everyone's expendable.

Daxter: "Let me handle this, Jak. Listen lady, we beat your stupid course, and we can outrace anybody in this city!"
Keira: "Wait! That voice..."
Daxter: "And there's just two things you need to know. One, we don't want to join your stinking race team, and two... you just lost a date with Orange Lightning. Let's go Jak."
Keira: *Throws the curtain open* "Daxter, it IS you!"
Daxter: "KEIRA?!"