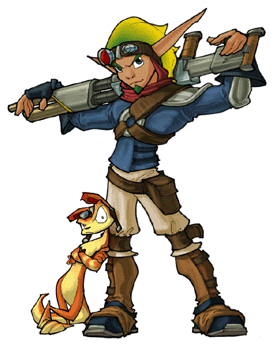 This world is better left to Jak.

A very popular series of Platform Games created by Naughty Dog for the PlayStation 2 and PSP, Jak and Daxter is centered on the escapades of the Heroic Mime turned rogue turned good guy Jak, who has the ability to channel the energy substance known as Eco, and his wise-cracking, human-turned-ottsel sidekick, Daxter, who usually just sits on Jak's shoulder while he does all the hard work. And this is just two of the many people you'll get to know throughout the series. So far, the series consists of:

Tropes related to those specific games can be found on their pages.

On a side note, the Ratchet and Clank series seems to have a very friendly rivalry (Sound familiar?) with this one. Games in both series will liberally borrow some concepts from the other, and will commonly feature cameos and even sometimes playable appearances of the other heroes.

Taking it to the next level, SCEA released Playstation Move Heroes, a three-way crossover between Jak and Daxter, Ratchet and Clank, and Sly Cooper! Watch the trailer here.

There is now a HD, 3D rerelease of all three main games (trailer).

Tropes used in Jak and Daxter include:

Tropes that explain the series on a technical level.

Tropes concerning the world's vehicles, weapons, and other forms of technology.

Most of these tropes can be found sorted by character here.

Tropes about the characters' outfits.

Tropes that don't fit or haven't been sorted into the other folders.

Retrieved from "https://allthetropes.org/w/index.php?title=Jak_and_Daxter&oldid=1795322"
Categories:
Cookies help us deliver our services. By using our services, you agree to our use of cookies.