Everything About Fiction You Never Wanted to Know.
(Redirected from James Bondage)
Jump to navigation Jump to search 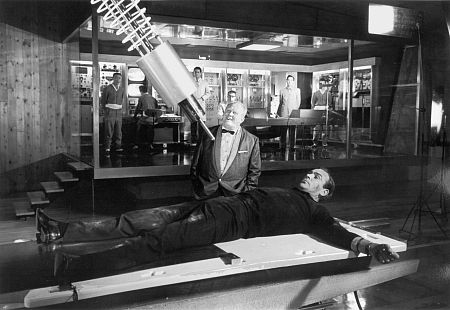 No Mister Bond I Expect You to Dine-- er, die!

"I wonder if I qualify for some kind of hostage-based Prestige Class by now."
—Elan, The Order of the Stick

The Damsel in Distress is a dime a dozen in media since the beginning of time, but now that females are starting to take on a more active role, there's no one left for them to save!

Meet the male equivalent of the Damsel in Distress. He's usually the sidekick to a butt-kicking Action Girl, always getting himself captured for the female lead to save. This may also occur in shows featuring a male protagonist. Even when the male protagonist is a total Badass, they tend to get captured quite a bit... usually to demonstrate their awesome escape skills.

Sometimes regarded as a product of twentieth-century feminism. In fact, it is Older Than They Think. When classifying fairy tales according to the Aarne-Thompson system, one distinguishing mark of several types of tales is that a man (or men) is rescued—generally by the heroine. (He is generally her Love Interest; they are generally her brothers.)

The dude may have picked up the Distress Ball. If he was a Badass before getting kidnapped, he may suffer Badass Decay. If he continues to kick ass after being freed, he's Badass in Distress. Compare Non-Action Guy.

Examples of Dude in Distress include:

Italy: (over the phone) Germany! Germany! I'm in North Africa right now and I CAN'T TIE MY SHOELACES!

Kaiba [thinking]: Hmm. Perhaps I should consider keeping him on a leash.

Indy: Oh, Marion. You had to go and get yourself kidnapped.
Marion: Well, you didn't do any better yourself.

"You did not guess," she asked, "that it was my lips alone and not my heart that denied you? O-Tar had ordered that I die, more because I was a companion of Ghek than because of any evidence against me, and so I knew that if I acknowledged you as one of us, you would be slain, too."
"It was to save me, then?" he cried, his face suddenly lighting.
"It was to save my brave panthan," she said in a low voice.

Chuck: "It's never safer in the car!"

Buffy: Will I stay this way forever? Sleepwalk through my life's endeavor?
Young Man: How can I repay--
Buffy: Whatever.

"My god, are you gonna take a flying leap?"

Gubler: I'm always getting held hostage by teen idols — first James Van Der Beek was a guest star and held Reid hostage, and this time it's Luke Perry. I actually saw Scott Baio out front, and I swear he looked at me. I want George Michael to hold me hostage in season eight.

The Girl: Mountaineering rope -- it'll hold an elephant!
No. 6: I must remember that next time I go climbing with one.

Elan: Awww man, I didn't know *I* was gonna be the girl!
Daigo: Yes, it's a big day for gender equality all around. (glancing at his pregnant wife who has just wiped the floor with a whole squad of ninjas)