Everything About Fiction You Never Wanted to Know.
Jump to navigation Jump to search
/wiki/James Deancreator 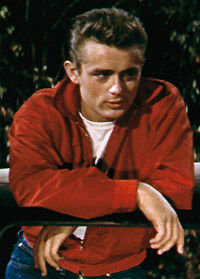 James Dean was an actor, born on 8 February 1931. He is best known for the movies Rebel Without a Cause, East of Eden, and Giant... with good reason, as these are the only three films in which he had a starring role. He was killed in a car accident on 30 September 1955 at the age of twenty-four. He was the first actor to receive a posthumous Academy Award nomination for Best Actor.

A symbol of cool for teenagers of the 1950s and nowadays for his being (reportedly) bisexual. Well and truly Too Cool to Live. His relatively short career and enduring popularity also makes him something of a real-life Ensemble Darkhorse.

His roles were usually Troubled but Cute guys with Freudian Excuses.