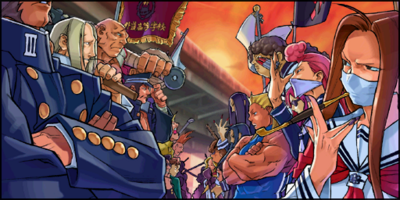 Whether just making a bit of trouble at the back of the classroom or out picking fights, schoolyard bullies or members of one of those oddly-decked-out motorcycle gangs, delinquents are a sure sign that not all is right. Japanese Delinquents come in two distinct flavors: Throw-away minor characters, and major (or main) characters.

The visual style of the Japanese delinquent in fiction has remained more consistent than in Real Life, - since at least the 1988 release of Sakigake Otokojuku.[1] The description below is an up-to-date and relatively realistic one.

For both types, speaking with rolled Rs (to convey a sense of rage) and dyeing their hair in some form is usual (though the likelihood is greatly increased for the major-character type), with bleached-blond being the most common variety. A ridiculous Pompadour or ri-zento/regent hairstyle that juts out from the forehead like a battering ram is a delinquent hallmark; this is seldom played straight nowadays, especially for main characters. Other visual identifiers include:

The minor, throw-away type is a general blend of everything you'd expect from someone called a delinquent: getting into fights, disturbing the peace, and generally just not getting along with society at large. If they attend school, their school jacket is likely left open. If not, they'll have some other jacket to leave open, will likely not be wearing a shirt, and will have white bandage-style wrapping around their abdominal area. Female delinquents tend to favour full length school skirts. They are essentially there to provide trouble for the main cast to clean up.

The major character type, on the other hand, carries at least some the above traits, but is almost always a Jerk with a Heart of Gold, or at least portrayed as a somewhat more sympathetic figure. Particularly, the open jacket can be left out (though often it is not).

Female delinquents often have their seifuku in some form of purposeful disarray - unknotted scarf, loose socks against regulation, partially unbuttoned or knotted top, or the skirt hiked up, though given the average length of an anime uniform skirt this may not be noticeable. Rolled-up sleeves and an unusually long skirt also indicate a tough cookie. They will sometimes be portrayed as kogals (who flaunt their disposable income), or some other subculture, or engaging in less violent inappropriate behavior.

In Japanese, delinquents are referred to, both in real life and in fiction, as yanki (as in "yankee", because of their rebelliousness and Hawaiian-patterned shirts they sometimes wore rather than an affinity with the USA), while their leaders are called banchou. Girls can be called sukeban or onna banchou. Motorcycle and automobile racers are usually considered a separate subculture of delinquent, known as bousouzoku.

The Yakuza, Japan's indigenous organized crime syndicates, tend to have very little respect for delinquents. In their eyes, they're professional criminals with a sense of tradition, whereas yankis are just young punks with an attitude.

For delinquents in general, including the Western types, see Delinquents and Lower Class Lout.

Examples of Japanese Delinquents include: