Everything About Fiction You Never Wanted to Know.
Jump to navigation Jump to search
/wiki/Jeff Hardycreator 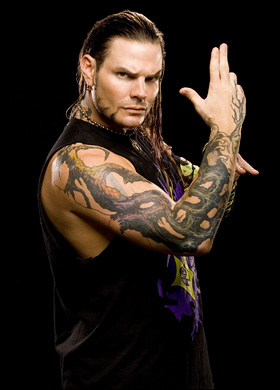 Jeffrey Nero Hardy, often known as "The Charismatic Enigma", is a professional wrestler currently signed to Impact Wrestling, where he is a former two-time TNA World Heavyweight Champion. He's best known for his time in WWE, where he began as part of the Hardy Boyz tag team with his brother, Matt. He has won multiple championships both on his own and with his brother, including being a WWE World Champion three times.

Despite not being very tall or bulky by pro wrestling standards, and not being the greatest talker in the business (despite the nickname), Jeff got over by using an array of high-flying moves in his matches that took the crowd's breath away. While Jeff's made his living by being "extreme", some of the things in his matches bring his sanity into question. And while his wrestling persona can be pretty strange sometimes, he's reportedly even stranger in real life.

Speaking of Jeff's life outside of wrestling, it hasn't always been much fun. He's had his house burn down with his dog still inside, and in 2009 he was arrested after the police found a large stash of drugs during a raid on his new house.

That Other Wiki has more information on him. Read it here.

Jeff Hardy provides examples of the following tropes:
Retrieved from "https://allthetropes.org/w/index.php?title=Jeff_Hardy&oldid=1927469"
Categories:
Cookies help us deliver our services. By using our services, you agree to our use of cookies.