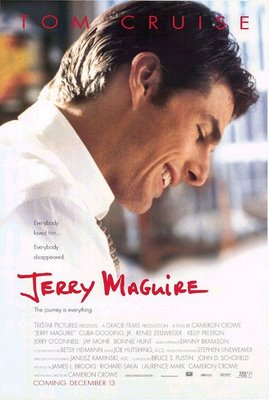 Everybody Loved him. Everybody disappeared. The journey is everything.

-coming to that in a second - and then he gets fired. The money pot is gone and so goes the fiancee, while the respect was just arse kissing and the admiring protege turns out to be a total dick who steals all his clients. The only two clients who stay with Jerry are the brash, egotistical, loud-mouthed and materialistic Rod Tidwell (Cuba Gooding Jr.) and the top prospect for the NFL draft, good ole southern boy Quinn Mallory Frank Cushman (Jerry O' Connell). The only person to follow him from the office when he strikes off to start his own firm is single mom Dorothy Boyd (Renee Zellweger), who decides that an inspiring letter and a chance meeting at an airport are worth risking the ability to feed her child. On the other hand, the child is Johnathan Lipnicki, a Morality Pet with a Bart Simpson haircut, so maybe he doesn't need food to survive. It's all part and parcel of the film's feel good na-

-okay, moving on. So Jerry thinks he has a great chance with this Cushman kid. His dad shakes his hand which in the Deep South means that they're married or something. Later on he's pimping the kid out to sports teams and horny oil barons when it turns out that Daddy Cush has signed a deal with the dastardly protege and that the handshake was just a way to get his DNA, even though he has a Southern accent,always plays nice guys like the dad from The Wizard (film) and is The Dude's brother. This leaves Jerry with only Tidwell, Dorothy and the Milky Bar kid and he has to-

-right, cutting to the chase.He spends the next few months having Unresolved Sexual Tension with Dorothy, having UST with Tidwell and playing Dad to the kid (no UST there, thank God!). So the guys shout catchphrases and black slang at each other a lot, he marries Dorothy while not actually committing to her and they all spend the next few months not earning any money and not feeling any love or joy to make up for it. Eventually Tidwell decides to stick by his sports agent while Dorothy decides to leave her husband. Tidwell kicks ass in his next game so much that it pretty much secures his and Jerry's futures and cements their man-love. Jerry remembers that agent-client man-love was part of his Epiphany Moment and so decides to do the feel good, inspiring thing and get back his wife. He goes to her place, gives her a Rousing Speech (plus the indication that he is now loaded) and tells her that she completes him. She informs him that the mere act of entering the abode and announcing salutation was an act of sufficient romanticism to rekindle their love.

They all live Happily Ever After with lots of money.

The film is noted for its feel good factor, placement way up on the idealistic end on the Sliding Scale of Idealism Versus Cynicism and use of many memorable quotes like Tidwell's repeated use of Show Me The Money. The Other Wiki says that these lines are largely attributed to Cameron Crowe, director and screenwriter of the movie, this wiki takes the view that it's a good bet that the lines from the film have a link to the sole credited scriptwriter.

Tropes used in Jerry Maguire include:

Laurel: You fuck this up, I'll kill you.
Jerry: I'm glad we had this talk.

Jerry: "What had I become - just another shark in a suit?"